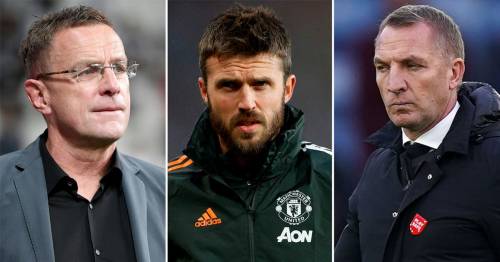 Manchester United have left themselves with a big decision to make after finally deciding to part ways with Ole Gunnar Solskjaer.

A 4-1 defeat at Watford was the final straw for the Norwegian, who leaves Old Trafford with the team six points outside the Champions League places after a fifth league defeat in seven games.

Michael Carrick will take temporary charge of the first team until a new man arrives, with a statement from the club confirming their plans to appoint an interim manager until the end of the season.

United's options may be limited, though, with potential successors to Solskjaer either being employed elsewhere or potentially holding out for different roles – including No.1 choice Mauricio Pochettino.

And with the likes of Luis Enrique and Zinedine Zidane seeming less likely by the day, Mirror Football looks at five men who could be convinced to take over midway through the campaign.

Who should Manchester United appoint as manager? Let us know in the comments section

Solskjaer was sacked by Man Utd after the defeat at Watford
(

Former RB Leipzig manager Rangnick has been linked with a number of top jobs over recent years, and was on the verge of taking over at AC Milan in 2020.

The German has stepped away from the dugout of late, taking up a development role with Lokomotiv Moscow ahead of the 2021-22 season.

He is reportedly being considered as a short-term option for the club, and could provide the blend of experience and patience to lay the framework for a long-term Solskjaer successor.

The issue with the doyen of German coaches – a mentor to the likes of Thomas Tuchel, Jurgen Klopp and many, many more – is that he would want a say in the overall running of the club, and would like some kind of directorial role when stepping aside.

Would United's board be willing to give him such a big say? What we've seen from the Glazers, Woodward and co over the years suggests not.

Of course Rodgers is currently employed, but the Leicester City boss has been mentioned in connection with the United job for some time.

His team came within 90 minutes of denying Solskjaer's team a top-four finish in 2019-20, before recording another fifth-place finish last season despite working with fewer resources than a number of the teams above them.

Rodgers has distanced himself from the role, and would certainly be unlikely to take an interim appointment without the possibility of an extended stay.

But if that circumstance changes, he could well be tempted now that he knows the post is vacant. And it's not like he hasn't done it before.

If United decide to limit themselves to a currently out-of-work manager, Favre may well be one of the more appealing options.

The Swiss manager has been biding his time since leaving Borussia Dortmund early in the 2020-21 season, having previously led the team to back-to-back second place finishes in the Bundesliga.

Those impressive finishes owed a fair amount to the form of Jadon Sancho, and United's higher-ups could decide he is the right short-term option, partly to unlock the big-money summer signing.

How did you rate Man Utd's performance against Watford? Let us know below

On the subject of reinvigorating United's big-money players, another potential option is the man who turned Fred into a £53million prospect.

Fonseca was Shakhtar Donetsk manager when they won the Ukrainian title with United's Brazilian in the middle of the park, and also oversaw Champions League victories over the likes of Manchester City and Napoli.

The 48-year-old is unattached after leaving Roma at the end of last season, with moves to Tottenham and Newcastle United previously mooted but never materialising.

If it's an interim appointment they definitively want, he could be just the ticket.

Another option, of course, is to stick with caretaker Carrick until the end of the current campaign.

Solskjaer wasn't always seen as a long-term option when he took temporary charge back in 2018, but did enough to earn himself more time in the dugout than either Louis van Gaal or Jose Mourinho managed before him.

Carrick knows the club, having shown his capabilities as a player and a member of the coaching staff, and would be an easy appointment for the hierarchy.

But a lot will no doubt end up resting on the results over the coming days and weeks. If he struggles to have an impact, then it'll rule him out straight away.

Previous : Libyan interim PM registers bid for presidency
Next : Pregnant woman shot dead while unloading gifts from her own baby shower in Philadelphia