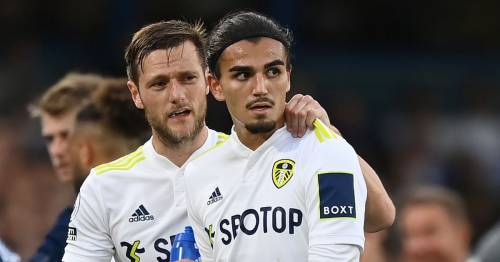 Leeds face a defensive crisis after their appeal over Pascal Struijk’s red-card tackle on Harvey Elliott was rejected.

The FA refused to rescind the red card, despite Elliott’s support for Struijk and he sympathised with the centre-half on social media.

Elliott, who faces months out after his operation on Tuesday, posted a classy message to Struijk on Instagram saying: “Sorry about that Pascal.

“I think it’s wrong, but it will soon blow over brother and you will be back in no time smashing it again. Keep positive.”

Struijk is suspended for three games, starting with Leeds’ trip to Newcastle on Friday night, to compound their selection problems at centre-half.

Boss Marcelo Bielsa is expected to move Luke Ayling across from right-back and he played in the heart of the defence last season when Leeds last had an injury crisis there.

Leeds need three points on Tyneside and they have failed to win any of their first four top-flight games for the first time since 1958.

They have conceded 11 goals in those four games and have yet to take the lead.

Ayling says they need to improve on both fronts at St James’ Park.

“We need to tighten up a bit at the back and score that first goal in a game because we know how good we are when we do that,” he said.

Who should start at the back for Leeds against Newcastle? Have your say.

Luke Ayling will move across to centre-half against Newcastle
(

“So we’ve been looking at putting that right and now we want to come back flying.”

Leeds were expected to start better because they came ninth last season in their first campaign back in the Premier League for 16 years.

Ayling says they must forget about that achievement because it counts for little now.

“I think that ninth finish last season, we have to park that and start again.”

Previous : Teens turn to COVID-19 vaccine advocacy as most state laws prohibit minors from being vaccinated without consent
Next : ‘Shamima Begum was groomed and abused like victims in Rotherham, Telford and Rochdale’ – Geraldine McKelvie