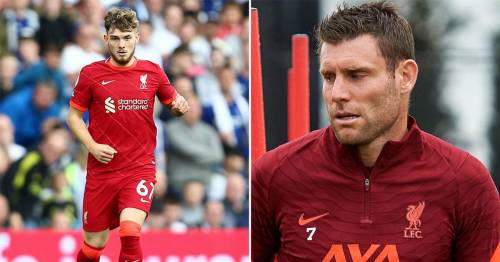 Speaking to Liverpool's website about Elliott, Milner said: "He's been so positive from the start, to be honest.

"I was talking about mental strength before, as soon as it happened, the things he was saying, he talks like he's been through it all before and he's a 30-odd-year-old player.

"He's incredible. He's got a great mindset, he's done all his work, he's progressing really well. Not too far off getting rid of the crutches, I think, which is fantastic.

"You just need to keep that phone out of his hands, so I think it's good when he's on his crutches because he can't be on Instagram and Twitter and all that!"

Elliott underwent surgery to repair his ankle shortly after suffering the injury, with Liverpool boss Jurgen Klopp hoping he'll be fit before the end of the season.

And the England youth international has made a positive start to his recovery, beginning work on an exercise bike in the gym earlier this month.

"They see the stuff in the gym and the videos, but at home now and he's on his crutches and he's doing band work and just lifting his leg up to keep the strength in his muscles.

"It's so boring and would be easy not to do, but that's the hard work that gives you the basis to push on through. He's doing really well and that's great to see."

Milner also discussed his role as a senior professional in the Liverpool squad, helping the likes of Elliott and fellow youngster Curtis Jones progress.

Jones, 20, has established himself as a useful member of Klopp's squad and could go on to play an important role this term.

Milner continued: "The talent that we have with the first team and the younger guys in the academy, hopefully the senior players can help them as much as they can.

"We know how brutal football is. You need so much luck, you need that mental side and that mental strength to deal with ups and downs.

"And that's where we have to come in as older, senior players and maybe take the difficult things off their shoulders and make it a bit easier for them and maybe keep that harder side away from them when it's disappointing.

"Because the ability these young guys have is incredible really. Then you just need that mindset to go with it."

The Reds return to action on Saturday when they face Watford at Vicarage Road.