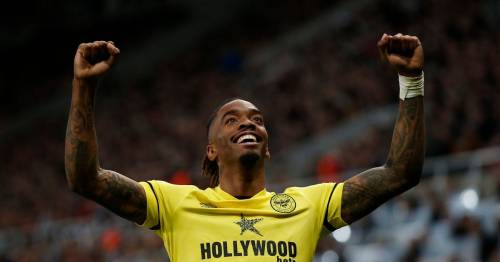 Ivan Toney insisted he wasn’t seeking revenge for being sold by Newcastle after producing an inspired performance.

The Brentford star was sold to Peterborough for £650,000 when he was a raw young striker and is now worth £50m.

Toney bossed Newcastle’s defence, scoring in the first half and clearing off his own line from Callum Wilson, and was a huge physical presence.

He said: “On a personal level it meant a lot. But I have no hard feelings against the club. They still hold a place in my heart and I wish them all the best for the season.

What did you make of Toney's reaction? Let us know in the comments section

Toney scored against his former club in a 3-3 draw
(

“Maybe when I was at Newcastle I wasn’t ready. Maybe I wasn’t good enough. Who knows?

“At the time the club had a decision to make and it was to let me go. But no hard feelings.

“I will have a special place in my heart forever. Without having been at Newcastle I wouldn’t be where I am today.”

Toney says he studied United keeper Karl Darlow before the game and said: “I hit my goal low and hard. We checked out the keeper's best attributes before the game, so I hit it low and hard and as long as it was on target I had a chance.”

And his goal saving clearance? “I kept my body on the line and defended it! I was in a bit of pain where it hit me!

“We could have won but if you can’t win don’t lose. We have belief for the next game.”

Brentford boss Thomas Frank said of Toney’s performance: “I have not asked him about how big a day it was for him. But I understand the story. He’d have wanted to prove people wrong.

“But sometimes people take a different pathway. I am pleased he got a goal. He cleared off the line. Fantastic link up play and he presented him very well today.”

Frank added: “It was lined up to be a massive party. This was a game Newcastle had to win.”

Brentford players actually thought they should have been winners
(

The Brazilian club record signing was singled out as a big asset by Howe pre-game, and Joelinton repaid his new boss’s faith.

"It felt really good to score. How I trained in the week (leading up to the game) seemed to show on the pitch and I'm pleased to score my first goal of the season. I will keep working hard and make sure I continue to help the team in the upcoming games.

Joelinton's goal against Brentford was his first of the season
(

"Eddie has brought in new ideas and a new style of play.

"The last ten days with him have been very good, both for myself and the team. We have worked hard and we must continue that, sticking together and keep fighting.

"We stayed positive during the game and continued our way of pressing and how we wanted to score a goal.

"It does feel like two points dropped. I had a great chance at the end which I should have scored. We are disappointed. We showed great spirit and passion to play football.”

Howe said of Joelinton: "I think he can be a huge player for us. From what I've seen so far, he's a technical player, very good feet, intelligent…obviously, the size that he is as well helps from various perspectives.

“I think he's got a real talent, a real ability. Unlocking that and making sure we can all see that, playing him in the right position, these are all things that I'm going to have to make assessments on but, certainly, he's going to have a big part in our future here."