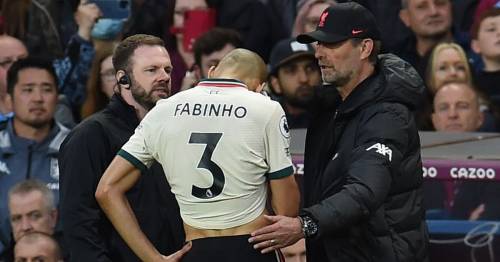 Liverpool’s victory over Aston Villa came at a cost – and the Reds may pay in silverware.

The sight of Fabinho coming off injured after 30 minutes took some of the lustre off a Liverpool comeback win at Villa Park to keep them in the title race. Fabinho may not be regarded outside Anfield as highly as stars like Mohamed Salah, Sadio Mane, Virgil van Dijk and Alisson, but everyone inside the club realises his importance to the team.

Claudio Ranieri once hailed Claude Makelele as the “battery” for his watch and in many ways Fabinho is the heartbeat of Jurgen Klopp’s great side. The Brazilian is the best holding midfielder in the Premier League, if not Europe, and he is adept at breaking up opposition attacks.

Liverpool could not play the open, attacking football, which is their trademark, if they did not have Fabinho protecting their defence. He is like a one-man wall and he is relentless when it comes to winning tackles and headers, making interceptions and turning over possession. Liverpool know they can allow Trent Alexander-Arnold and Andy Robertson to push forward into the opposition half because Fabinho is screening their defence.

He halts countless counter-attacks before they can threaten Alisson’s goal. Fabinho, 28, is enjoying his best season for Liverpool and as well as excelling defensively, he has contributed eight goals and one assist. These are ridiculous statistics for a No.6 and he has scored big goals too. He netted with a deft header at Turf Moor to clinch a hard-fought 1-0 win over Burnley and his strike launched Liverpool’s 3-2 comeback win over Villarreal to reach the Champions League Final.

Liverpool are now working on his muscle injury in the hope it will not be too serious. Klopp takes hope from Fabinho saying he felt “positive” about the injury and he came off immediately when he felt it. When quizzed about Fabinho’s injury after the 2-1 win over Villa, Klopp said: “I don’t know. He felt the muscle, not too much. “He’s quite positive, but I’m not sure what I can make of that, to be honest. We’ll see.”

HAVE YOUR SAY! How much will Liverpool miss Fabinho? Let us know in the comments section

It seems unlikely that Fabinho will recover to figure in Saturday’s FA Cup Final against Chelsea at Wembley and his absence would hit Liverpool’s chances of victory. It is a race to get him back for Liverpool’s last two league games at Southampton on Tuesday and then home to Wolves on Sunday week. The Champions League Final is still 17 days away and Liverpool would be hopeful he would be back to face Real Madrid in Paris.

Liverpool do have skipper Jordan Henderson and Naby Keita, who can play as a six, but they are not the same as Fabinho. Henderson often drifts out to the right when he plays in the midfield three to allow Alex-Arnold to come inside and play his laser-guided passes. Keita can break up the play, but he is more of a No 8 for Liverpool, playing in a more-advanced position.

There is also James Milner, but it would be a huge ask to expect him to step up successfully after a season spent mainly on the bench. Liverpool have no-one with Fabinho’s attributes and they will desperately hope he is back soon to help turn their dreams of unprecedented silverware into reality.

Previous : UEFA threatens Barcelona, Real Madrid and Juventus with new Champions League ban
Next : Boris Johnson joined TikTok and may have made an absolutely fatal error