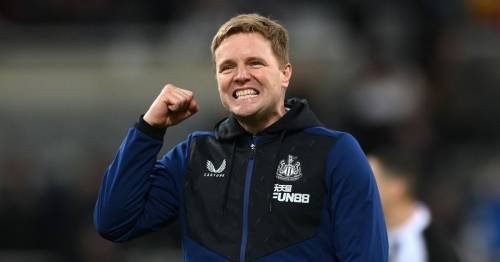 Eddie Howe has branded Chris Wood a "dangerous" signing who is set for his debut against Watford at the weekend.

The Newcastle boss says it was vital to sign a new striker after losing Callum Wilson to a calf tear for two months.

Wood has scored three goals in 21 appearances this season for Burnley, who were powerless to stop him from leaving.

Howe said: "Chris is an important signing for us at a crucial time and I’m very pleased we have been able to move quickly and bring him here.

"He is a very dangerous attacking threat, has a physicality and character that I really like, and he has vast experience in the Premier League. He will be a great fit for us."

Newcastle were desperate to plug what Howe referred to as a "gap" up front and sign a focal point for the attack ahead of a key period including meeting fourth-bottom Watford.

Wood will take the number 20 shirt and the signing takes the Saudi funded club's spending to £37m with another potential £60m of spending to follow.

Wood signed a two and a half year deal and said: “This is a very exciting opportunity for me and I’m delighted to be a Newcastle United player.

“I have played at St. James’ Park a few times and it’s an amazing place, so to have the chance to represent this club with those incredible supporters behind me and my teammates is very special.

“The club and manager have been first class during this process, and I really can’t wait to get onto the pitch and repay the faith they have in me, especially with a vital part of the season ahead of us.”

Diego Carlos is keen to move to Newcastle United
(

Newcastle are in 19th pace with 11 points and Howe is targeting at least six wins from the remaining fixtures, and a handful of draws to give them a chance of surviving in the top flight.

Plugging the defence is a priority now having conceded 42 goals, the joint worst in the division.

Rivals will pick up points soon with Watford also playing Burnley and Norwich in their next three games.