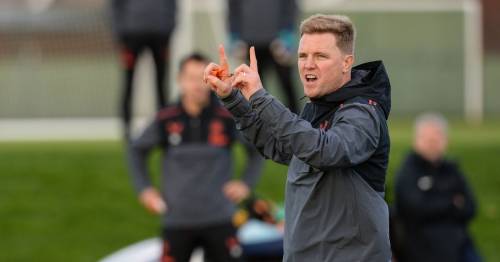 Jonjo Shelvey has revealed Newcastle players are so exhausted by Eddie Howe’s new training regime they are falling asleep at 8pm.

The United midfielder says hew boss Howe, and Jason Tindale who has taken training this week, have made work “very intense.”

Howe ordered a physical fortnight to raise fitness levels and refocus minds when he took charge – ending in last weekend’s 3-3 draw with Brentford.

The 43-year-old has spent the week isolating in his Tyneside hotel reviewing training footage and will pick the team to face Arsenal on Saturday.

It remains to be seen whether Howe will claim his COVID symptoms began several days earlier than his routine test on Friday last week which ruled him out of action.

Asked about the impact of Howe and his new regime, Shelvey said: ”It is very intense. You are on it every second of the day.

“You are constantly thinking of football. That is the way football should be played. He has galvanised everything.

“You are training but, like last international break, I would be asleep but 8pm every night because we were shattered from training!

“It takes getting used to but the lads are there now. We have to work day by day and week by week to get the results.”

Shelvey was singled out as a vital player for Newcastle's relegation battle by Howe and the midfielder added:

“Everyone is on board with what they want to do. You could see from the Brentford performance we were on the front foot, pressing more, more chances and better on the ball. For me personally it was better to play in that style so it is good.

”We go to Arsenal with a plan about how to win the game.

“When a new manager comes in you never know where you are going to stand. He said everyone has a clean slate and everyone has jumped on board what he is trying to do.”

Newcastle are winless in 12 games and face a vital week including home games against fellow bottom three strugglers Norwich and Burnley next week.

Previous : Up to 10% of homes could now be ‘uninsurable’ because of flood risk. Could yours be one?
Next : Michael Carrick’s first words with Man Utd set to appoint Ralf Rangnick as interim boss