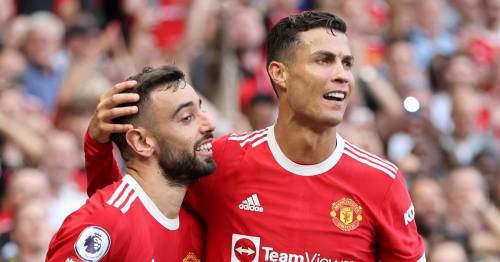 And Fernandes, 27, believes the Portugal skipper, 36, is keen to achieve more in his career – despite his advancing years.

"He once said something very interesting. He said it’s not he who follows the records, it’s the records that follow him.

Ronaldo has won plenty of trophies and broken an incredible amount of records during his illustrious career.

The forward is the all-time leading goalscorer for Real Madrid (45), in the Champions League (136) and in men's international football (115).

Fernandes added: "Say what you want. Easy goals, not easy goals. There are no easy goals.

"Even being in the right place, it’s hard to score. There are those who fail, he doesn’t fail."

Fernandes and Ronaldo have been international team-mates since the former made his senior Portugal debut four years ago.

But they became club colleagues, too, when the latter re-joined United on deadline day.

The Red Devils have been unconvincing in recent weeks, winning just two of their last six games in all competitions.

Fernandes and Ronaldo have been international team-mates since 2017

United's form has left them with 14 points from their opening seven Premier League games – two behind leaders Chelsea.

And Ole Gunnar Solskjaer's side are facing a nightmare run, playing Leicester, Liverpool, Tottenham, Manchester City and Atalanta twice in their next six fixtures.

But Fernandes believes they can do better, telling the club's website earlier this month: "[It's] not good enough, of course.

"We still have a lot of games to do it, we haven’t lost anything and we have to carry on fighting for everything."