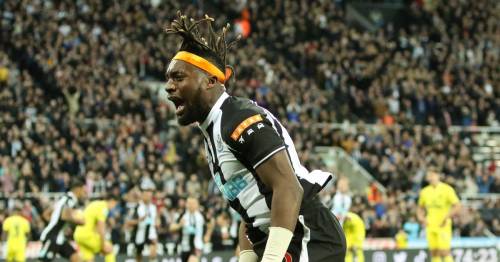 Allan Saint-Maximin has begged Eddie Howe to keep Newcastle on the attack as they face three games that will define the season.

The French winger wants to go for Arsenal next weekend, ahead of home games against bottom three rivals Norwich and Burnley.

Saint-Maximin has been freed up by Howe’s tactical plan for Newcastle, with Joelinton and Callum Wilson also likely to benefit.

But the Geordies have to find a way of plugging gaps in their leaky defence which has conceded 27 goals in 12 winless games.

Newcastle start a week of training today without Howe who is isolating in his Tyneside hotel room with COVID, but in constant contact with his staff and players.

Saint-Maximin said: “It was bad (to lose Howe). We need him. He is a great coach for me. I don’t need to see him for a year to know if he is a good coach.

“They have a nice philosophy and a nice idea, and you can see from the first game against Brentford we played more in attack and had more chances to score.

“We have to keep going with this and concede less goals and I am sure we will win more games.

“It is easier for the strikers when we have more of the ball and more positions and when we try to go forwards. Against Brighton I had no shots, and I defended for the team.

Were you impressed by Newcastle in their draw with Brentford? Comment here

Newcastle drew 3-3 with Brentford at the weekend
(

“Now we have more shots and chances to score and I scored. I hope to do the same, make assists and goals, because that is the only way to help my team.

“It is an improvement because we had a lot of shots, more than the last games. We improve but we still concede too many goals. We have to do everything to concede fewer goals and score when we have a chance.”

Newcastle’s home crowd remained upbeat despite their club’s dire league position. They will spend up to £50m in January and look at loan signings, to plug gaps at the back and solidify central midfield.

Saint-Maximin says Newcastle would be relegated if the Geordie faithful were to turn on the players, and has thanked them for their patience.

He said: “It is really important to have the fans. If at this moment the fans don’t give support to the team we will go down for sure.

“Everyone knows we need them to come back in games and do our best things, the good quality. Even though we are in a bad position, they support us.”

Howe’s deputy Jason Tindall says Newcastle are “waiting for the doctor” to determine whether the head coach can be in the dug out for Arsenal.

However NHS test and trace rules say he has to do ten days in isolation and have a negative COVID test. His positive result came on Friday after a “routine test” despite saying in a statement he was “feeling fine.”

That would make it unlikely Howe could claim significant symptoms began earlier in the week to cut short the isolation period, and is more likely to return to the training ground on Monday next week.

That would make his first game in the dug-out at home to Norwich.