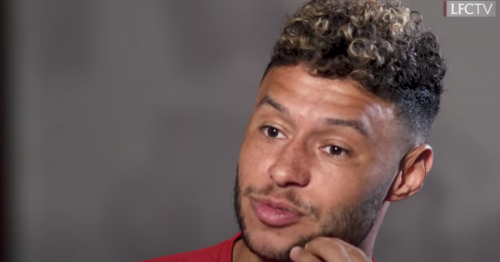 Alex Oxlade-Chamberlain started his third successive game for Liverpool on Saturday as they put four goals past his former club Arsenal.

Sadio Mane headed the Merseyside club in front before second-half goals from Diogo Jota, Mohamed Salah and Takumi Minamino rounded off the scoring.

Minamino's goal arrived seconds after he came on for Oxlade-Chamberlain, who was starting under Jurgen Klopp for the third successive game after outings against Atletico Madrid and West Ham United.

The £35m man hasn't always been an automatic pick for Jurgen Klopp, leading to suggestions he might look to move elsewhere in an effort to revive his England career, but his comments after the game suggest otherwise.

Has Oxlade-Chamberlain deserved more opportunities this season? Have your say in the comments section

Oxlade-Chamberlain has been given his opportunities in part due to injuries elsewhere in the Liverpool squad.

Naby Keita, James Milner and Harvey Elliott have all been ruled out of late, while Thiago Alcantara has only recently returned to action.

Even so, the former Arsenal man has been speaking like a man determined not to allow his latest opportunity to come to nothing.

“Whenever you get chances it’s up to you to put in a good performance and help the team to win – and that’s the only way you keep getting games.

“I’ve been lucky enough to get those opportunities recently, I’ve kept my head down, I’ve worked hard for them, made sure I was ready when the time came."

How do you think Oxlade-Chamberlain and his teammates got on against Arsenal? Rate the Liverpool players below

The win lifted Liverpool back up to third in the Premier League after West Ham lost to Wolves earlier in the day.

After helping Klopp's side get the better of an Arsenal midfield which welcomed back Thomas Partey, Oxlade-Chamberlain spoke of the value of aligning his own goals with those of the team as a whole.

“Now it’s just looking forward and keeping the momentum, keep helping the team to achieve all of our goals," he said.

“Ultimately, your individual goals kind of work hand in hand with that. If you keep working hard, things fall into place, so, I’ll be working hard for that and we’ll see what happens.”

Liverpool's victory took them back up to third
(

Oxlade-Chamberlain will be out of contract at Anfield in 2023, and this – combined with his lack of action – has prompted talk of a return to north London.

He has started fewer than 40 Premier League games in four years as a Liverpool player, with a serious knee injury keeping him out of action for one of the four.

However, after getting a chance to impress in a Liverpool shirt, he will hope he can make a case for a longer run.