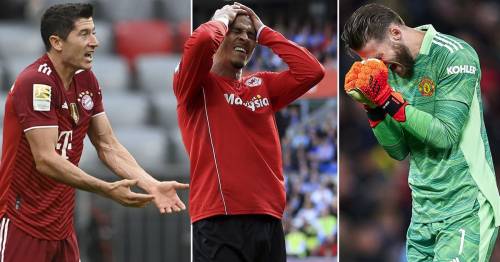 Transfers always have a chance of collapsing if a contract hasn't been signed – and many players have experienced that pain in the past.

Real Betis star Nabil Fekir, 28, is the latest footballer to open up on a failed move, allegedly missing out on joining Liverpool in the summer of 2018.

Jurgen Klopp's side have gone on to win the Champions League, Super Cup, Club World Cup and Premier League since the reported collapse.

Fekir, meanwhile, hasn't won anything at Betis since he joined the Spanish side in July 2019, although they did achieve an impressive sixth-place finish in La Liga last term.

Here, Mirror Football recalls ten players that failed to secure a move of their dreams – or in Peter Odemwingie's case, a move to Queens Park Rangers.

Fekir, then 25, was reportedly on the verge of joining Liverpool from Lyon in 2018, shortly after helping France win the World Cup in Russia.

As quoted by Spanish outlet Estadio Deportivo, the player said: “Everything was closed.

"I passed all the interviews, I spoke with Jürgen Klopp, he told me that he loved me, we all did it and, when we were about to sign, there were problems with my representative and the negotiation broke down.

“They said it was because I had knee problems, but the truth has been proven over time. My knee is super good.”

Fekir has since scored 13 goals in 73 La Liga appearances for Betis, although he hasn't played for France this calendar year.

Manchester United star De Gea was set to join Real Madrid on deadline day in August 2015 – with Keylor Navas heading in the opposite direction – before the transfer collapsed.

The La Liga giants were frustrated with the collapse, confirming in a statement: "In short, Real Madrid have done everything they could at all times for deal to take place."

Loic Remy joined Chelsea after Liverpool pulled out of a deal
(

Remy had agreed to move to Anfield in July 2014 and only needed to complete a routine medical to finalise a dream transfer.

But the doctors reportedly discovered problems and Liverpool decided to pull out of the deal, leaving the Frenchman stuck at Championship outfit QPR.

Just a month later, though, Remy was snapped up by Chelsea and went on to win the Premier League and League Cup during his first season at the club.

The striker said on joining the Blues: "They are one of the best clubs in the world… I can't wait to play for the first time in front of my new fans."

Liverpool signed Mario Balotelli and Rickie Lambert instead, with the pair managing just three Premier League goals between them as they finished sixth.

Blackburn almost signed unknown Polish striker Lewandowski from Lech Poznan in 2010 when the transfer was scuppered by an Icelandic volcano erupting.

Mother nature spewed ash across Europe's airspace, bring flights – and Blackburn's negotiations with the striker's representatives – to a holt.

Lewandowski instead moved to Germany, scoring 410 club goals since the beginning of the 2010-11 campaign and winning 11 Bundesliga titles.

Blackburn, meanwhile, suffered relegation from the Premier League two years later and have not returned since.

Lewandowski said earlier this year: "I had the opportunity to join Blackburn… but I would have liked to go and see the training centre, the stadium.

"I couldn't go because of the cloud. It was the volcano. The volcano with the ash cloud. t was one week and nobody could fly in Europe. The flight was booked, but we couldn't leave.

"It changed my life. If I had gone to Blackburn maybe I would have stayed there."

QPR, heading towards relegation from the Premier League in January 2013, were in desperate need for a striker and believed they had the perfect man in Odemwingie.

The Nigeria international scored 25 goals in his first two seasons at West Brom and was keen on signing for QPR, arriving at Loftus Road in his car on deadline day.

But QPR had failed to agree a deal with his current employers and the move collapsed shortly after Odemwingie was interviewed live on television.

The player's West Brom career never really recovered after that and he joined Cardiff in the summer, while QPR were relegated to the Championship.

Odemwingie admitted in 2019 : “Everywhere I go now, I get even more recognised for that interview than what I did on the pitch."

Gascoigne had the chance to move to leave Newcastle for Manchester United in 1988 – but rejected Alex Ferguson's offer for Tottenham.

The majestic midfielder went on to achieve wonderful things during his career, reaching the semi-finals of the 1990 World Cup and playing for Lazio and Rangers – among other clubs.

But he never won an English league title and retired with just one major trophy from his home country to his name – the FA Cup in 1990-91.

Gazza later recalled: "I was driving to Old Trafford. The phone went, and it was [former Tottenham chairman] Irving Scholar.

“He asked what I wanted in my contract and I asked for a nice house for my family. I rang my dad up and said, 'Spurs have offered a house. And he said, 'What are you waiting for?'

“I rang back and said my dad would like a car, a white BMW with a private reg on and they said, 'Consider it done.'

"But the phone rang again and it was my sister. She said, 'If mam's getting a house and dad's getting a car, I want a sunbed.' Irving said, 'Consider it done… just get here.'"

Tottenham almost completed a stunning deal for Juventus star Dybala in the summer of 2019, shortly after the Premier League side had reached the Champions League final.

Reports suggest the player wanted to join Spurs and Juventus were happy to sell him – but a deal never materialised.

According to The Independent, Dybala was demanding an eye-watering £350,000-a-week salary, which would have made him one of the Premier League's highest earners.

And Spurs chief Daniel Levy was never going to pay such a huge amount for a player that had scored just five Serie A goals during the previous campaign.

Dybala, now 27, continues to be linked with a move to North London but is yet to recapture his best form, hitting the back of the net only four times in the league last term.

Lee Bowyer reportedly rejected the chance to join Liverpool in 2002

Liverpool were reportedly wanted to sign Leeds icon Bowyer in 2002, around the time he won his one and only England cap.

Speaking to talkSPORT about the proposed move in March 2020, Bowyer said: "I was very close. I was halfway through a medical but it just didn’t feel right for me at the time.

"That is my biggest regret in football not going to Liverpool at that time. If I could’ve turned the clock back I would’ve gone. Looking back, I made the wrong decision."

"I knew my time was coming to an end at Leeds due to a few things behind the scenes that didn’t sit well with me so I knew it was my time to go.

"I thought doing another five years up north being a long way away from my family after doing six years at Leeds didn’t sit right but after all that I ended up going to Newcastle which is even further away, so it makes no sense!"

Fulham ace Robinson was set to join Italian giants AC Milan from Wigan in January 2020 before the reported £10m deal collapsed during the medical.

The English-born USA international, 24, was denied a dream move and was flogged to Fulham six months later for just £2m when the Latics encountered financial troubles.

Speaking about the failed transfer in July 2020, Robinson said: "When I arrived at the hospital and they started to check my knee and back, I hoped that everything was ok and that no hitch would come out that would blow up the deal.

"Then I started a stress test where I had to go on a very high intensity exercise bike for about 15 minutes.

"I didn’t understand what the doctors said since they spoke in Italian, but then they asked me if I had ever had heart problems before.

"Then they sent me to a hospital where I made further checks and finally, after 4-5 hours, they took me to the office.

“I thought I would finally sign the contract, and instead there they informed me that they would no longer take me because of a heart defect found during medical visits.

“It was a shock to me, I was torn, and I couldn’t hold back the tears. We were not talking about a knee ailment, but about a situation that leaves you puzzled."

Kaka rejected the chance to join Manchester City in January 2009
(

AC Milan legend Kaka almost made a £100m move to Manchester City in January 2009, shortly after the Premier League side had been taken over by Sheikh Mansour.

Discussing the proposed transfer in November 2017 with FourFourTwo, the player said: "The negotiations between City and I went very far indeed.

"It came to the point where all of the numbers and the finer details had been discussed. The offer was on the table. The only thing separating City and I was my final word."

What is the biggest transfer collapse in football history? Comment below

But Kaka couldn't go through with the transfer and decided to join Real Madrid for a world record £56m six months later.

Shortly after the deal collapsed, City's executive chairman Garry Cook told the BBC : "If you want my personal opinion they bottled it.

"He clearly was for sale but we never got to meet with the player, the behaviour of AC Milan got in the way."

Previous : Rafa Benitez makes decision on returning to Newcastle after Saudi Arabia takeover
Next : “At a crossroads”: Polish PM berates EU ahead of trip to European Parliament