Eddie Hearn believes deals could be struck with the prospective next opponents of Anthony Joshua and Tyson Fury to step aside and allow the two British heavyweights to fight next.

Joshua’s promoter Hearn revealed he has been speaking to Fury’s management team MTK Global about a potential blockbuster bout in which all four of the major world titles in the blue riband division would be on the line.

It was anticipated a meeting could be staged this winter if Joshua had successfully defended his WBO, WBA and IBF crowns against Kubrat Pulev on June 20 while Fury’s trilogy fight against Deontay Wilder for the WBC title was close to being arranged for the following month, only for both contests to fall through because of coronavirus.

Hearn was adamant he was not in negotiations with Fury’s handlers in an effort to bypass Pulev or Wilder but he said cryptically: “Everything is solvable with money.”

“With everything that’s happening, there is, I believe, keenness from the sides Anthony Joshua and our team and Tyson Fury and his team to potentially go straight into that fight. 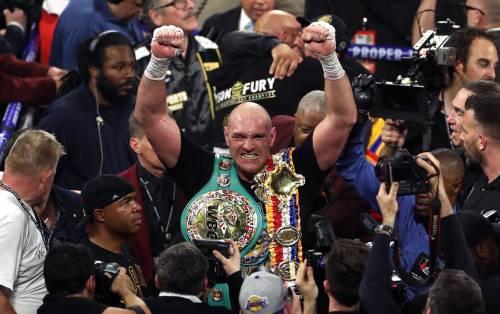 “But the major hurdle is we’re both under contract for other fights. Could a deal be struck for them to step aside? Absolutely. Would we be willing to entertain it? Absolutely.

“But right now the focus is on the contracts we have signed with a move for the winners fighting the winners probably in spring ’21.”

Hearn admitted he has had offers from several foreign countries eager to stage Joshua-Fury, which he thinks is highly unlikely to be held in the UK this year.

He added: “We’ve had a number of approaches from territories enquiring and making offers to stage that fight. Ourselves and MTK have been in discussions to look at those offers and discuss when this fight might take place.

“We would love to bring AJ against Fury to the UK. Right now, especially in December, that doesn’t look like a possibility.

“While I’d love to say ‘we’re in negotiations and it’s close’, what we’re doing is we’re talking and we’re all moving in the right direction.

“We’ve all got the same mindset which is: create the biggest fight in boxing history between two British world champions fighting for the undisputed world heavyweight championship.

“You will get this fight, it’s just a case of when and where.”