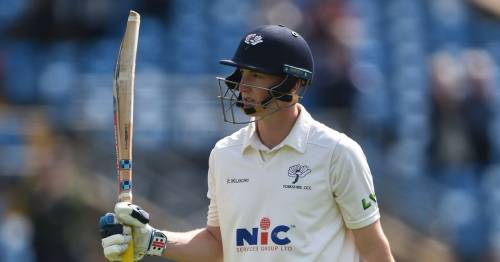 Brook has been in excellent form for Yorkshire this season, with the 23-year-old currently the leading run scorer in division one of the County Championship. He has scored 635 runs at an average of 158.75 in six innings, making three hundreds and three half-centuries.

As a result, Brook has been tipped to play Test cricket for England this summer, with a spot at number five up for grabs after captain Ben Stokes confirmed he would be moving down to number six. And former England captain Kevin Pietersen is among those calling for Brook to make his debut, praising his "brilliant start to the summer".

And Maiden believes Brook deserves an opportunity, telling the Yorkshire Post : "I think he's ready. Harry is in incredible form and I just feel privileged watching him bat.

"You just hope that if he does get in [the England side], he gets support from the whole country, the media and that things go well for him. I'm sure they would.

"He's got a good head on his shoulders, he fits in lovely, he's got a lovely manner and I think he'd handle it. I don't think he'd be overawed by the occasion at all."

Brook made his T20I debut for England earlier this year
(

Brook made his T20I debut for England earlier this year after some stunning performances in the T20 Blast and The Hundred. "There was a worry that he would become a white-ball specialist if he got down that route, but in his mind he has no interest in that," Maiden added.

"He's very clear in what he wants, and he knows his own game for a young man at that stage of his career, which is also impressive. He's a great lad, too, and hopefully he gets his chance and carries on with the approach he has for us when he does get that chance [with England], because it will only serve him well."