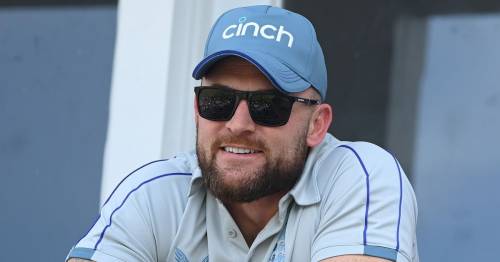 Stuart Broad has revealed new England Test coach Brendon McCullum told his players to "run towards the danger" ahead of their magnificent five-wicket win over New Zealand in the second Test at Trent Bridge.

England successfully chased down 299 in exactly 50 overs to win the match and seal a stunning series victory with one Test left to play. Jonny Bairstow scored a brutal century, reaching three figures off just 72 balls as he struck England's second-fastest Test match hundred.

He shared a brilliant 179-run partnership with new captain Ben Stokes and launched a blistering attack on the New Zealand bowlers after tea, striking 93 off just 44 balls. And Broad has now lifted the lid on McCullum's inspiring team talk.

Speaking after the win, Broad revealed: "Baz's team talk was very much 'let's attack the danger, let's run towards the danger' and every part of your mind is going for this win. Whoever is to come, the changing room has full belief that you can do your job to get the win.

"So it was never really a case of, if we lose one we might shut up shop. It was always we're going to win.

"And if it doesn't work, don't worry about it, but we're going to go for the win. But I didn't quite expect to see what I saw from Jonny.

Broad went on to compare the win to the dramatic victory in the third Ashes Test at Headingley in 2019, adding: "It was the most outrageous hour I've seen in Test cricket from a partnership. Obviously Headingley had incredible nerves.

"I felt sick watching that tight thing with Leach and Stokesy. But that was just exhilarating, astonishing. Trent Bridge giving out free tickets, I'm sure there were people in this ground who have never watched Test cricket before. How inspiring is that?

"At Headingley, you could cut the atmosphere with a knife and it felt very nerve-wracking, you were sick with seeing what's coming. Whereas that was just about shouting every time a boundary happened.

"I saw a stat that showed in nine overs they scored 102 after tea. It wasn't as if Baz said 'go and whack it, go and slog it'.

"It was just play with the mindset that we're going to chase these runs down. And Jonny just got hold of a few pull shots that got him going.

"That striking was… only a handful of players in the world can do that. Johnny is obviously in that group."

Previous : David Willey hits out at Yorkshire as he slams club for ‘inaccurate’ comments
Next : ‘I make lingerie for blokes – it’s easier to go for a run in a G-string’