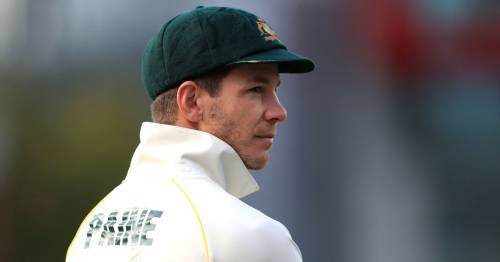 Australia cricket legend Shane Warne has named the man he believes should be chosen to take over as Test captain after Tim Paine 's resignation.

The 36-year-old stepped down last Friday, just as details of explicit text messages he sent to a female former colleague at Cricket Tasmania in 2017 were about to be revealed publicly.

Paine was cleared by investigators in a misconduct probe at the time, but chose to quit his role last week as his actions did not "meet the standard of an Australian cricket captain."

It leaves the Baggy Greens with a big decision to make in terms of his replacement, less than three weeks before the start of the Ashes series.

Warne believes those choosing the next skipper should look no further than "poster boy" fast bowler Pat Cummins.

"For me, the time is right to make Pat Cummins captain, something I thought even before the events of Friday unfolded," he wrote in a column for Australian newspaper The Daily Telegraph on Sunday.

"The poster boy, respected and loved the world over, Pat Cummins should now be named captain, and either Matt Wade, Josh Inglis or Alex Carey should get their chance to come in and play Paine's role in the Test team.

"Inglis gets my vote. He's got silky smooth hands behind the stumps, he's a 360 degree player with the bat and coming off three first class hundreds last season for Western Australia.

"He's a great team man who I saw first hand at the London Spirit this year. He's 26. Get him in."

Details of what Paine had said to his former colleague were made public later on Friday, which according to a report in the Daily Mail , included a string of sexual text messages and a photo of his penis.

One of the X-rated messages sent by the now former Australia captain said: "Will you want to taste my d**?? F*** me, I'm seriously hard."

Paine read out a pre-prepared statement in front of reporters as he announced he would be stepping down.

"Nearly four years ago, I was involved in a text exchange with a then-colleague. At the time, the exchange was the subject of a thorough Cricket Australia Integrity Unit investigation, throughout which I fully participated in," he said.

"That investigation and a Cricket Tasmania HR investigation at the same time found that there had been no breach of the Cricket Australia Code of Conduct. Although exonerated, I deeply regretted this incident at the time, and still do today.

"I recently became aware that this private text exchange was going to become public. On reflection, my actions in 2017 do not meet the standard of an Australian cricket captain, or the wider community. I’m deeply sorry for the hurt and pain that I have caused to my wife, my family, and to the other party."

Paine added he did not want this revelation to distract from his country's bid to retain the Ashes this winter.

"I’m sorry for the damage that this does to the reputation of our sport," he said. "And I believe that it is the right decision for me to stand down as captain, effective immediately. I do not want this to become an unwelcome disruption to the team."

Despite stepping down from the captaincy, Paine is still expected to be in contention to represent Australia during the series.

Previous : Sir Ian Botham names ‘match winner’ in England squad who will be crucial to Ashes hopes
Next : Tim Paine ‘ready for Ashes’ despite resigning as Australia skipper amid sexting scandal