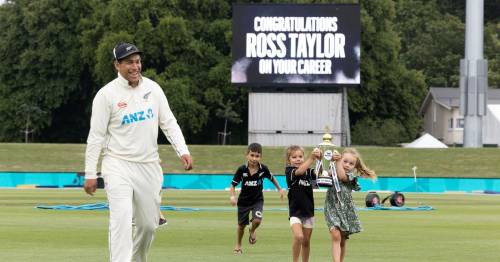 New Zealand legend Ross Taylor enjoyed a dream ending to his illustrious Test career, taking the final wicket as his side beat Bangladesh by an innings and 117 runs in Christchurch.

Taylor only made 28 in his final Test innings, but fate conspired on day three and the 37-year-old was able to end his career with one final memorable moment.

With New Zealand needing just one wicket to draw the series, the light dimmed and the umpires told captain Tom Latham that he would have to turn to spin if he wanted play to continue.

Having decided not to pick a frontline spinner in their team, Latham turned to Taylor, who had previously picked up two wickets with his occasional off-spin in a Test against India in 2010.

The first two balls of his over were astutely defended by number 11 Ebadot Hossain, but the third was met with a wild swipe and was promptly caught by Latham.

Taylor ends his 112-Test career with 7,683 runs at an average of 44.66 and he will bring his international career to a close in April after a three-match ODI series against the Netherlands.

Speaking after the Test, Taylor told Spark Sports: "It was an emotional game for me, my family and friends, as well as the team.

"It got quite flat there towards the end. I chucked it up, and Tom said it was the most pressure has felt in a game! It was a great way to finish."

Latham also paid tribute to Taylor, saying: "Everyone wanted me to take that catch. It was pretty special to sign off the Test match like that.

"Ross has been absolutely amazing for New Zealand cricket for 17 years. We are looking forward to celebrating with his family tonight.

"[I have learnt from his] calm nature, the fact that he has scored runs in all parts of the world, to learn from him how he goes about things… How he approaches different bowlers.

"He has had a significant impact on us as a group, and also New Zealand cricket. He inspired generations. He inspired me to play cricket.

"He is someone I always look up to. To play cricket with him, and the final Test with him, is pretty special."

Previous : ‘Furnace’: Argentina roasts in record-setting heat wave
Next : Pat Cummins explains why Australia have not sledged England in the Ashes