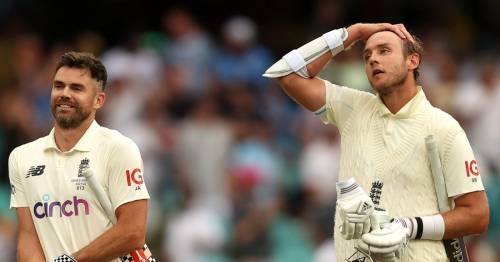 Managing Director of England Men's Cricket Rob Key has revealed that new Test captain Ben Stokes was "prepared for an argument" when the pair spoke about the futures of veteran seamers James Anderson and Stuart Broad.

Anderson and Broad were controversially axed for England's 1-0 series defeat to the West Indies, sparking concerns over whether the duo had played their last Test. However, they are set to return this summer under Stokes' captaincy, with the all-rounder insisting it would be "stupid to never consider them for selection".

Speaking to Sky Sports about Anderson and Broad, Key said: "He [Stokes] was sort of prepared for an argument when we spoke about it. He was like 'Right, Jimmy and Broady are coming back'. I just went, yeah no that's fine'. And then we sort of moved on."

Key also said that while he could "understand" the decision to drop Anderson and Broad in the Caribbean, he would not have done so. "I don't look at everything as just black or white, I always look at the reason," Key added.

"I always thought this as a pundit; if there's logic behind what they're doing to some degree, then fine, I can understand why people are doing it. There was no logic to me when England in the World Cup in 2015, dropped Alastair Cook and then brought in Gary Balance.

"I can understand that. Doesn't mean that I would have done it – but I've shown now that they've come back."

"They are two of the greats of the game and, in my opinion, it would be stupid to never consider them for selection. They are part of the best XI, so, yeah, it's pretty simple."