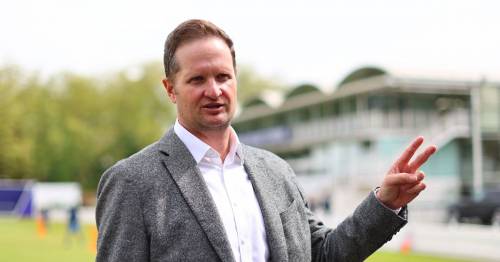 Rob Key has revealed England would be willing to allow their new head coach to also work in the Indian Premier League, stating: "I would much rather have the best person for ten months of the year than someone not as good for 12."

England have decided to split the head coach role between red and white ball cricket and several of the leading candidates are either currently working in the IPL or have done so in the past. Coaching in the tournament is a lucrative gig and Key has insisted it would not be an "issue" if a coach wanted to combine the England job with a role at an IPL franchise.

In an interview with Nasser Hussain for Sky Sports , England's new Managing Director of Men's Cricket said: "You have to move with the times and it's like with players. If you take Jos Buttler for example, Buttler can play the whole of the IPL but a coach could not do it?

"I don't see that as an issue at the moment and who knows where we are going in five, six, seven years' time. There's no international cricket on during the IPL, so I don't see it as an issue in the day and age we live in, where it would be an issue if you are a coach doing that.

"You have got to take everything in its individual case. Someone might say, 'how can you then call someone back, how could you call say Jofra [Archer] back from the IPL when the coach is there the whole time?' I will tell you what, the coach is not running into bowl and [potentially] going to get injured.

"You can't just have blanket rules for everything, you have got to look at each individual case and think about what is the best thing for us to do here. I would much rather have the best person for ten months of the year than someone not as good for 12."

Gary Kirsten is among the frontrunners to coach England's Test side
(

Simon Katich has also been heavily linked with the job
(

Key was also asked about the fact that most of the leading candidates to coach England are foreign, with South African Gary Kirsten and Australian Simon Katich widely reported as the frontrunners for the Test job. "As far as English coaches, this has gone on for a long time now and we have got to look at how we educate our coaches," he added.

"We make sure the same thing as well with our coaches; coaching at times is like a player – you want to invest in the right people all the time. You have got to earmark [prospective coaches] because there's a lot of other things you can do, like you [Hussain] and I would have gone onto the other side of the fence [punditry] which is a very attractive part of cricket.

"We have got to make sure that we are seeing, as they go through the system or if they are completely outside of it or if they are going through courses, then we have got to earmark people and say 'this person is worth the investment, these are the ones we've got to try and make sure we keep an eye on them throughout our system because in five or six years' time they might be the best person to do that job.'"