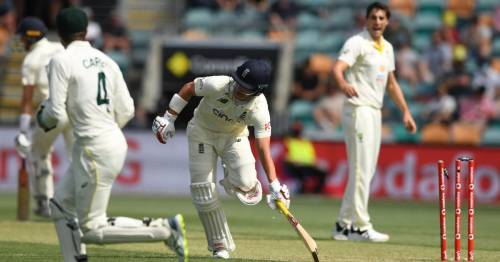 Having been recalled to the side in place of the struggling Haseeb Hameed, Rory Burns was run out after failing to trouble the scorers.

Burns managed to safely negotiate Mitchell Starc's opening over, but he was run out in the second over after some hesitation with opening partner Zak Crawley.

After Crawley attempted to steal a quick single, Marnus Labuschagne produced a direct hit and Burns was just short of his crease.

It was a poor call from Crawley, who hesitated himself midway through the runs, and Burns could have saved himself if he had produced a dive.

However, the left-hander was sent packing for a duck and England were left 2-1 in response to Australia 's first innings score of 303.

Former Australia captain Ricky Ponting was highly critical of Burns for not diving, telling Channel 7: "I want to make a bit of a point of this.

"There had to be more desperation there from Rory Burns. He's back into the side, fighting for his Test career, and he's not willing to put in a big dive to try and save his wicket.

"I know it's not his fault, not his call. But you can imagine Marnus Labuschagne in that same situation, he would've been diving from two or three yards out from the crease."

However, former England players David Gower and Steven Finn were more sympathetic towards Burns and instead criticised Crawley's decision to try and take the single.

Speaking on BT Sport, Gower said: "The big screen delivers the bad news to Rory Burns who, through absolutely no fault of his own, leaves the field runless. It was a dreadful call from Zak Crawley."

Finn, meanwhile, told BBC Test Match Special: "That's a horrible start. You have to feel for Rory Burns, he's been stuck on the barbecue by Zak Crawley."