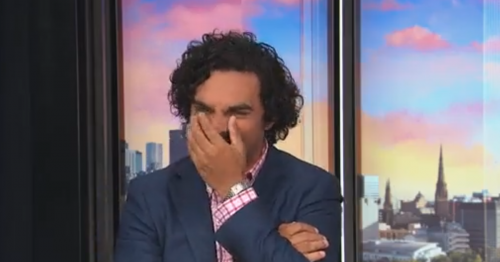 However, Armstrong accidentally said that Paine was had a "bulging d**k" rather than a bulging disc, leaving his fellow presenters Michael Roland and Lisa Miller in hysterics.

Armstrong said: "Australian skipper Tim Paine is set to undergo neck surgery but medical staff remain confident that the veteran will be fit for the Ashes.

"Paine has a bulging d**k that has been … disk that has been — that’s a funny one — has been causing him pain. I'm going to throw to you very quickly, Michael."

However, Roland did not let his fellow presenter off the hook, asking: "A bulging what?"

"Disc, I said, disc," Armstrong replied, before Roland ended the segment saying: "That’s what I thought you said. Thank you Tony."

Paine later retweeted a clip of the moment, before replying: "True story actually."

The wicketkeeper is confident that he will be able to captain Australia when they take on England in the Ashes this winter, provided the surgery and his rehabilitation goes well.

In a statement, he said: "The consensus of the spinal surgeon and the CA medical team was to have the surgery now which will allow plenty of time to fully prepare for the summer.

"I expect to be able to restart physical activity by the end of this month and be back in full training in October.

"I will be ready to go by the first Test and am very much looking forward to what will be a huge summer."

As a result of the operation, Paine will be unable to feature in Tasmania's early Sheffield Shield games.

Australia have not played a Test match since their January defeat to India at the Gabba and they may not play another one until the first Ashes game on December 8.

They are currently scheduled to take on Afghanistan in a one-off Test in November, but that game is in doubt.

Previous : Andy Murray lauds Emma Raducanu’s “incredible” US Open win as “huge” for British tennis
Next : Chris Woakes opens up about decision to snub IPL in favour of T20 World Cup and Ashes