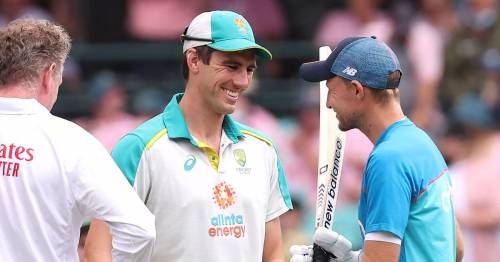 The ongoing Ashes series has been notable for the spirit in which it has been played, with former Australia star Glenn McGrath claiming it has been "a little bit too nice".

Nathan Lyon, who infamously spoke of wanting to "end careers" the last time England made the trip Down Under, was seen offering tips on bowling off-spin to Joe Root.

The England captain also shared a joke with Mitchell Starc after the Australia quick felled him with a blow to the "abdomen " during the second Test.

Even James Anderson has shared details of a light-hearted exchange he had with Steve Smith after successfully batting England to a draw in the fourth Test.

Australia have made a notable effort to change their image in the wake of the 2018 ball-tampering scandal which saw Smith, David Warner and Cameron Bancroft all banned by Cricket Australia.

Pat Cummins, who was appointed as Australia's new Test captain ahead of the Ashes, says he is "really proud" of the way his players have conducted themselves.

He also admitted that Australia did need to "tone it down a little bit", with a 2018 review into the team's culture describing it as "winning without counting the costs".

In an interview with the Telegraph, Cummins insisted his side "do not have to try and impress anyone or sledge just because it might have been done like that in the past".

He said: "You have to be aware of it. From a couple of years ago it was pretty obvious the world wanted all cricket teams, particularly the Aussie cricket team, to tone it down a little bit.

"I keep encouraging all of our players to be themselves. They do not have to try and impress anyone or sledge just because it might have been done like that in the past. Just be themselves.

"No doubt, the first Tests have been pretty smooth sailing and it [sledging] is something to keep an eye on. But I've been really proud of how the lads have conducted themselves so far.

"You lead by your actions in this space. If I need to pull someone up [for sledging] I will but everyone is an adult here.

"They have heard it loud and clear from the outside what is expected of us and from cricket fans in Australia. I will not be taking all the credit, the boys have been fantastic themselves."

Previous : Ross Taylor takes just third Test wicket in 112th and final New Zealand match to seal win
Next : Injury felt like surgery without anaesthetic but I want to play through pain in Hobart – Ben Stokes