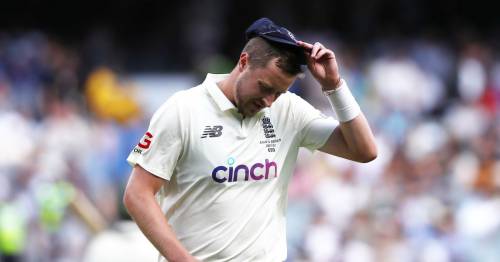 Seamer Ollie Robinson has been urged to 'improve his fitness' in order to play Test cricket by England bowling coach Jon Lewis.

Robinson opened the bowling alongside Stuart Broad on day one of the fifth Ashes Test in Hobart, and started with a bang by taking the two important wickets of David Warner and Steve Smith.

His opening partner Broad also dismissed Usman Khawaja in between the Sussex seamer's two wickets to leave Australia in all sorts of trouble at 12-3.

Despite his quick start though, Robinson was dealt yet another setback after he was forced to end his spell – and day with the ball in hand – early due to an injury in his back.

Ollie Robinson celebrates after getting David Warner out for a duck
(

This is not the first time the 28-year-old has been dealt a fitness blow in the series, after he limped off in the first Test in Brisbane, and the third in Melbourne.

Following his track record, bowling coach Lewis has demanded that Robinson gets fitter to compete at Test level.

He commented: "[His fitness] is something he needs to improve.

"He's got a record of playing a lot of games of county cricket but international cricket is of a higher intensity and you play it all year round.

"So he's got to get used to understanding what it takes to be a full-time year-round international cricketer and playing that extra day, five days of Test cricket."

The quick bowler played a part in all three of the opening matches down under, before being dropped in the fourth Test in Sydney, where England battled their way to a hard fought draw.

Of course the Sussex man is relatively new to the Test scene having made his debut in June 2021 against New Zealand.

Despite bursting onto the scene as one of England's most reliable bowlers in recent months, Robinson has been warned by Lewis that he still has a few things to improve on before he establishes himself as a real Test player.

He continued: "With these series we play now, with the times we're in, everything is squashed together so there's not a great deal of rest and recuperation between games," Lewis said.

"That's something he's going to have to deal with. Is it a concern? It's one of the things he really needs to work on.

What have you made of Ollie Robinson during the Ashes? Let us know your thoughts in the comments section.

Ollie Robinson has been urged to improve his fitness
(

"He's shown over the course of the English summer and this series so far he can put back to back games together but there's definitely areas he needs to work on."

Despite being pulled out of the attack early on, one man who was impressed by Robinson's performance was former England bowler Steven Finn.

Following his impressive spell, Finn said that Joe Root and his team will be desperate that the Sussex seamer feels much better on the morning of day two.

Finn told the BBC : "There's no doubt Ollie Robinson was a handful on that wicket with his ability to bowl a fuller length and get the batter forward.

"Once he was injured, England had to manage their resources the best they could. They will be hoping he wakes up feeling a bit better."

Previous : Russia ‘may stage fake attacks on own troops’ as war in Ukraine ‘just days away’ – World News
Next : Ricky Ponting slams Rory Burns after England opener run out for a duck in the Ashes