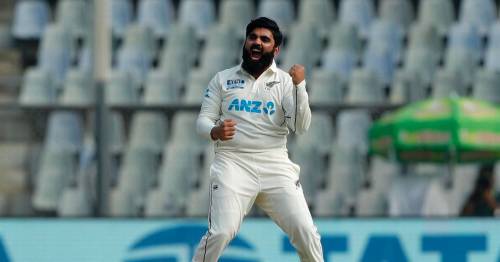 New Zealand cricketer Ajaz Patel has become just the third player in history to take all ten wickets in a test match innings.

The spin bowler followed England 's Jim Laker in 1956 and Anil Kumble in 1999 to achieve the monumental feat.

Patel, who was born in the same city in which he made history, dismissed four of India’s batsmen for a duck, one of which was Virat Kholi.

Mayank Agarwal top scored with 150 and Axar Patel registered a gritty 52 to bolster the home side while Patel, whose parents emigrated to New Zealand in 1996, dominated the rest of the lineup.

He roared with delight once the final catch was taken and was embraced by his teammates after an incredible achievement.

Ravi Ashwin was seen applauding his fellow spinner along with the crowd once the innings was complete, while the player walked off the pitch holding up the match ball.

"It was quite special for me to be back in Mumbai and to be able to pick up a few wickets is always nice," Patel said, beaming with pride.

"I certainly didn’t expect that much turn on day one, but I guess the good thing is and the main thing is there’s pace and bounce in the wicket.

"As a spinner that’s what you’re looking for and then the spin’s an added bonus on day one."

Patel may need to repeat his heroics as the Black Caps were bowled out for just 62.

Mohammed Siraj has taken three wickets, while spinners Ashwin and Pate have taken one each.

So far only Tom Latham has reached double figures, before he was caught for just 10.

This is the second and final test of the series and with the first resulting in a draw, it's all to play for in this match.