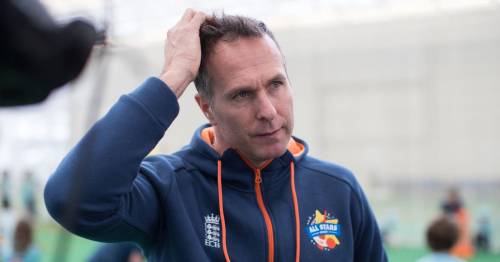 Michael Vaughan may be blocked from appearing on Ashes coverage on BT Sport.

The broadcaster chose not to send a bespoke commentary team Down Under, and instead planned to take the audio feed from one of the Australian rights holders, Fox Sports.

But now the mega sports channel is reviewing plans to use Fox Sports commentary for its coverage of the historic test series, which starts in Brisbane on December 8, after Fox signed Vaughan up to be involved in their coverage.

BT Sport hold exclusive UK TV rights for the five-match Test series and in light of recent developments, that position is to be looked at again.

BT Sport may use a different audio set up, such as Channel 7, where the likes of Sir Ian Botham and Ricky Ponting provide expert analysis, meaning Vaughan may not appear on British TV throughout the Ashes at all.

A BT Sport spokesperson said in a statement: "As a result of Covid and travel restrictions BT Sport had made the decision to take our commentary feed from the Australian host broadcaster.

"The recent report presented to UK Parliament uncovering institutional racism within cricket and specifically Yorkshire County Cricket Club is extremely disappointing and a concern for all.

"Given these recent events we are reviewing and discussing our commentary plans with Cricket Australia."

BBC made the decision on Wednesday after he was stood down from his BBC Radio 5 live show earlier this month.

Rafiq claimed the former England captain said "there are too many of you lot; we need to do something about it” to a group of Asian players during a 2009 game between Yorkshire and Nottinghamshire.

Vaughan denies he made the comment earlier this week he took to Instagram to voice his displeasure with being unable to commentate on The Ashes for the BBC.

He wrote: "Very disappointed not to be commentating for TMS on the Ashes and will miss working with great colleagues & friends, but looking forward to being behind the mic for Fox Cricket in Australia.

Vaughan vehemently denies Azeem Rafiq's allegations of racism against him
(

"The issues facing cricket are bigger than any individual case and I want to be part of the solution, listening, educating myself and helping to make it a more welcoming sport for all."

Following their latest decision regarding Vaughan, BBC released a statement saying that he would also not be involved in its "wider coverage of the sport at the moment".

"While he is involved in a significant story in cricket, for editorial reasons we do not believe that it would be appropriate for Michael Vaughan to have a role in our Ashes team or wider coverage of the sport at the moment," it said.

"We require our contributors to talk about relevant topics and his involvement in the Yorkshire story represents a conflict of interest."

Previous : Saudi lifts suspension of direct entry for travellers from 6 countries
Next : Graham Gooch claims racism is a “societal issue” and raises fears for other sports too