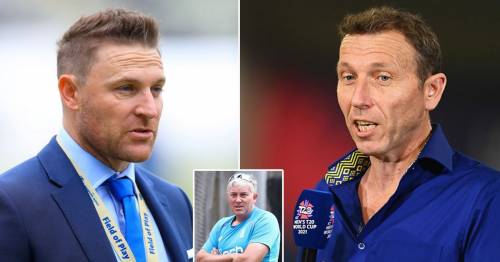 Michael Atherton believes the appointment of Brendon McCullum as England's new Test coach "could be an inspired pick", describing the New Zealand legend as the "anti- Chris Silverwood ".

McCullum was unveiled as the new coach on Thursday, replacing Silverwood after he was sacked back in February following England's 4-0 defeat to Australia in the Ashes. The appointment is the latest in a raft of changes which have seen Rob Key become Managing Director of England Men's Cricket and Ben Stokes replace Joe Root as Test captain.

And former England skipper Atherton believes the fact that Stokes is now in charge has had a big influence on McCullum getting the job. Writing in the Times, Atherton claimed Key has "selected McCullum very much with Stokes in mind".

He wrote: "It is not hard to see why Key, with England at a troubled and low ebb, has turned to a man who had helped revive a team in a similar situation before. The decision has a lot of logic.

"In his first major appointment — making Stokes captain was such a formality as to be no decision at all — Key could not have signalled his intention any more clearly to move away from what has characterised the past two years.

"As is often the way, Key has chosen someone cut from a very different cloth to what went before; McCullum is the anti-Chris Silverwood.

McCullum has been described by Atherton as the "anti-Chris Silverwood"
(

"The identity of the captain is crucial here of course. Stokes and McCullum share similar beliefs about the game and will work to a familiar script.

"He has selected McCullum very much with Stokes in mind. It could be an inspired pick." After McCullum's appointment was confirmed, Key said he feels the 40-year-old will form a "formidable coach and captain partnership" with Ben Stokes and told England fans to "buckle up and get ready for the ride".

McCullum, meanwhile, said: "I can't wait to get started. Ben Stokes is the perfect character to inspire change around him, and I look forward to working closely with him to build a successful unit around us."