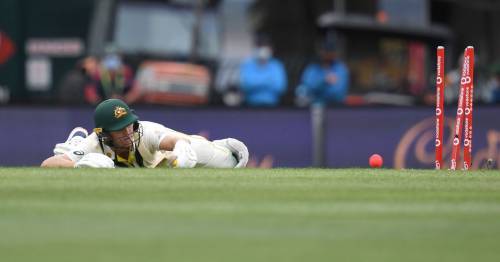 Marnus Labuschagne has seen the funny side of the way his wicket was taken in the fifth Ashes Test.

The Australian batter was straight-bowled in bizarre circumstances, following the collapse of the hosts' top order in what had been a brilliant start to the final Test for England.

Usman Khawaja, David Warner and Steve Smith all fell for just six runs between them as Ollie Robinson and Stuart Broad started superbly.

Labuschagne could have done for a duck as well, but Zak Crawley – who had already caught Warner and Smith at second slip – was unable to make it a hat-trick of takes and dropped the ball.

The Aussie made the most of it by playing a part in the counter-attack alongside the excellent Travis Head, but was bowled round his legs by Broad in what will go down as one of the most comical moments from this series.

Labuschagne shuffled outside of his off stump but his leg foot appeared to give way at the crease and he lost his balance.

The end result was the batter left in a crumpled heap at the crease after getting his legs into a tangle, and Broad wheeling away in celebration after the ball ripped through his stumps.

He was visibly frustrated and shaking his head as he walked off the pitch, but had calmed down enough to see the funny side after the end of the day's play in Hobart.

"How’d you go today? Yeah, just got a good one," he wrote on Twitter alongside a photo of the moment his wicket was taken.

It was an extraordinary moment, which was not lost on those covering the action.

"What an extraordinary way to go," former England bowler Steven Finn said on BBC Test Match Special. "It is almost as if Labuschagne's foot slides across the grass.

"He gets himself in a complete tangle. He has been bowled around his legs middle stump. I don't think we will see that again in our lifetime."

Despite a strong start with the ball, though, England finished the day wondering once again what might have been after a brilliant counter-attack led by Head.

After his brilliant start, Robinson was forced to sit the rest of the match out at 2-15 after complaining of back spasms.

And no-one could match what he and Broad had been doing with the ball in hand, as Head became the leading run scorer in this series with another century and Cameron Green reached 50 himself.

Rain brought a premature end to day one, with Australia on 241-6 despite losing their first three wickets for just 12 runs.