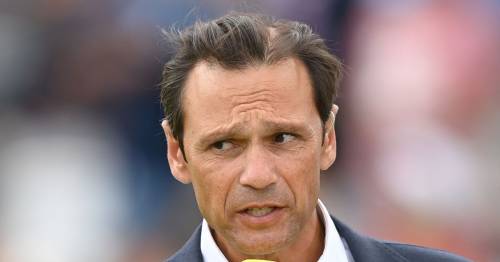 Former England batter Mark Ramprakash believes there is a "a cloud that hangs over" the DCMS report on racism in cricket.

The DCMS published the findings of their parliamentary inquiry into cricket's racism scandal, sparked by Azeem Rafiq 's allegations against former county Yorkshire, on Friday

The inquiry found that was a "deep-seated" issue within the game and suggested the government should limit cricket's funding unless the sport can demonstrate "continuous, demonstrable progress".

However, while Ramprakash welcomed the report's recommendations, he took issue with the fact the committee is chaired by Tory MP Julian Knight, slamming the Conservatives and Prime Minister Boris Johnson.

"For me there is a cloud that hangs over this report," Ramprakash wrote in the Guardian.

"The DCMS committee is chaired by Julian Knight, the Conservative MP for Solihull, and the majority of its members sit on the government benches.

"It is their party that created the hostile environment and was responsible for the Windrush scandal – an episode that resonates personally with me as my father came over in 1960.

"As of the end of last year only 5% of Windrush victims had received compensation.

"Knight stands behind a prime minister who writes about black people with 'watermelon smiles' and Muslim women as 'letterboxes'.

"His government is led by the same people who organised a deliberately divisive Brexit campaign, has presided over a period when race hate has gone through the roof, and continues to demonise and criminalise refugees who attempt the perilous journey across the Channel in inflatable dinghies.

"Knight comes across as sincere in his criticism of what has gone on in cricket, but what are his qualifications for sitting in judgment over the commitment of others to the reduction of racial injustice in this country?

"I feel there is an irony to him leading this committee at this time, and perhaps his party should also demonstrate their own commitment to the fight against racism, and the success or failure of any efforts they have made."

Previous : 5 Ashes talking points as Travis Head makes triumphant return to the side in Hobart
Next : Italy’s sewers will give early alert for future COVID spikes