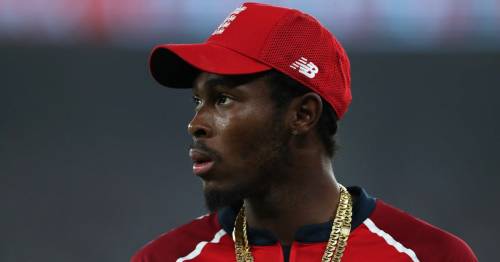 Jofra Archer says he does not believe England will be any worse off without himself and fellow star man Ben Stokes at the T20 World Cup, which gets under way later this month.

Captain Eoin Morgan will be without the pair in the United Arab Emirates – bowler Archer ruled himself out with an elbow problem and all-rounder Stokes is taking a break from the game to protect his mental health after his own injury issues.

While it is a blow for England to travel to the Middle East without two of their star names, Archer believes there is more than enough talent lying in wait to make sure their absences are not felt too keenly.

"Yes, myself and Ben Stokes are unavailable, but I’m not worried about that in terms of the way the team will perform," he wrote in a column for the Daily Mail.

"I know there is enough strength in depth to cover our absence. We saw in the summer that there is so much talent within the England white-ball squads. It was a blessing of the Covid period that we got to see just what people waiting in the wings can do.

"Liam Livingstone confirmed he is a straight swap for Stokes. You don’t have to think about it. He’s a guy who walked out and hit an England record 42-ball hundred against Pakistan."

Archer continued: "As for the bowling, people may suggest I am a big loss because of my record in T20 but I would counter that by saying I am only one person.

"I have always believed I’m only as good as the guy at the other end. You are working as a pair when you are bowling and if I’m going at two-an-over and the other guy is going at 10s, I view it as going at sixes. The same in reverse.

"The strength of this England team is that everyone works with each other. It’s the best quality it has. Everyone feeds off each other, and there is a culture of playing for your team-mates rather than yourself.

"So although I’m not sure which way they will go in selection, whoever comes in to take the new ball will do well."

England are set to begin their campaign in the UAE on October 23, when they take on the West Indies in the first of their group games.

They then take on one of the qualifying teams (yet to be decided) on October 27 before facing Australia three days later.

Two more group games will follow in early November, against another qualifier and South Africa, while the semi-finals and final will take place later in the month.

They arrived in the UAE on Tuesday without Sam Curran, who has been replaced by brother Tom in the squad after suffering back pain while playing for the Chennai Super Kings in the Indian Premier League.

The incoming Curran has also been playing in the IPL – also held in the Middle East – alongside several England stars, and Archer feels the fact they will be used to the conditions may work in their favour.

"Lots of England players have IPL experience and conditions in the UAE will be pretty familiar to them," he said.

"Some of the players have been competing there over the last few weeks and that could count in our favour.

"One of the biggest differences between playing T20 in India – where the tournament was originally supposed to be held – and in the UAE is the size of the boundaries.

"In India, there are quite a few small grounds and only Sharjah in the UAE is comparable in terms of dimensions – Dubai and Abu Dhabi are much bigger.

"Dubai pitches don’t tend to have much grass on them and it’s the same as India in terms of swing. It does a bit in the air and skips through in the first six overs and then that’s it. Once out of the power play, it gets a lot easier for the batters.

"And this England team have proven they are consistently good in all conditions when it comes to T20 cricket."