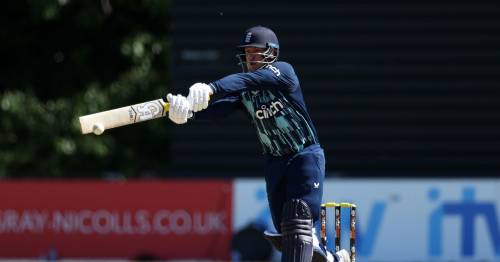 England have wrapped up a 3-0 clean sweep over the Netherlands after David Willey, Jason Roy and Jos Buttler led them to a comfortable eight-wicket win in the final ODI at Amstelveen.

England were without captain Eoin Morgan after he withdrew on the morning of the match due to a groin problem. The 35-year-old's absence from the final ODI caps off a poor tour which saw him make back-to-back ducks in the first two games.

With Morgan out of action, Buttler led the side and opted to bowl first after winning the toss. Willey was the pick of the bowlers as England got the Netherlands out for 244, while David Payne bowled well on debut.

After Willey claimed the wicket of teenage opener Vikramjit Singh with the new ball for the third time in the series, the Dutch looked to lay a decent platform with three of their top five reaching fifty. Payne was denied an early wicket when he surprised Tom Cooper with a bouncer that was top-edged towards Liam Livingstone at short midwicket.

However, Livingstone pulled out of what should have been a simple catch after appearing to be blinded by the sun and Payne had to wait until the final over of his spell to take his first England wicket. Ironically, Cooper was eventually caught out by Livingstone, with the veteran falling for 33 to Adil Rashid.

Max O'Dowd became the first Dutch batter to reach his half-century, but was caught behind off Livingstone the very next ball. Bas de Leede and captain Scott Edwards then shared an 84-run partnership that pushed the Netherlands pas 200, but lacked any real impetus.

In fact, the Dutch scored just two fours in a dull 18 over passage of play between the 21st and 39th. The approach could have paid dividends if they had been able to up the ante in the final 10 overs, but instead they collapsed.

After De Leede was bounced out by Brydon Carse for 64 off the final delivery of the 40th over, the Netherlands lost seven wickets for just 41 runs. Rashid got Teja Nidamanuru stumped for four, Tim Pringle was run out for six and Willey dismissed both Logan van Beek and Aryan Dutt for ducks.

Payne belatedly got his first England wicket when he had Edwards caught at mid-on for an impressive 64, before Willey wrapped up the innings by bowl Paul van Meekeren for two. The 32-year-old finished with figures of 4-36 from 8.2 overs and ended the series as the leading wicket-taker, having picked up eight at 15.50.

In response, England made light work of the chase as Roy, Phil Salt and Buttler all starred with the bat. Salt fell just short of a third consecutive score of 50+, getting bowled for 49 off just 30 balls by Van Meekeren.

It sparked a mini scare for the visitors when Dawid Malan was bowled by Van Meekeren just two balls later for a duck. However, Roy and Buttler quickly quashed any doubts with an excellent 163-run partnership to see England home.

Roy struck an unbeaten 10th ODI century and has really looked to cash in after his failure in the first game, having scored a match winning 73 in the second. Buttler, meanwhile, was merciless as he struck 86 off 64, finishing the match with aplomb as he deposited Pringle into the stands to wrap up a 3-0 victory.

Overall, this series has been a valuable fact finding mission for England ahead of their World Cup defence next year. Having not played an ODI in 11 months, established stars like Roy, Buttler and Willey have underlined their credentials, while less experienced players like Salt, Livingstone and Carse have all impressed.