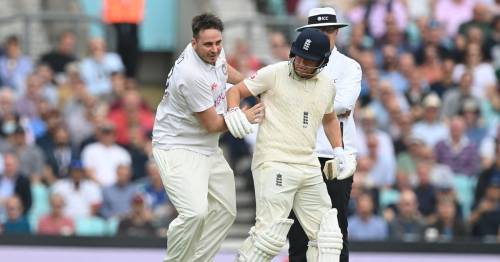 YouTuber Daniel Jarvis, aka 'Jarvo 69', has denied a charge of aggravated trespass after being accused of invading the pitch at the Oval during the fourth Test against India and allegedly colliding with England star Jonny Bairstow.

Jarvis was arrested on September 3 over the incident, which was the third time during the series that he had ran onto the pitch.

All three incidents were uploaded to his YouTube channel, which has just over 160,000 subscribers.

Jarvis appeared at Croydon Magistrates' Court on Tuesday and pleaded not guilty to charge of aggravated trespass.

"The television broadcast had to be suspended and there was significant disruption to the game."

Jarvis's defence lawyer, Bruce Reid, told the court that his client did not intend to "intimidate any person or to obstruct or disrupt any activity as alleged".

Jarvis was granted unconditional bail by the magistrates and the case will go to trial on March 23 next year.

An ECB spokesperson condemned the incident at the time, saying: "Any pitch invasion is completely unacceptable.

"The ECB and our host venues do not tolerate any such behaviour which risks the safety of players, officials and staff.

"The ECB works closely with all our venues to share information and enhance their security operation."

England batter Ollie Pope also stated that the players were sick of the stunts, saying: "He's made a few appearances in this series and I don't know how he got on the pitch again, to be honest.

"I just try and stay in my bubble and don't let it affect me. Learning how to switch on and off is part of the art of batting.

"I think so, I don't know. It got a few laughs first time around but I guess it just stops the play for five minutes every time he comes on. There's nothing to be gained from it."