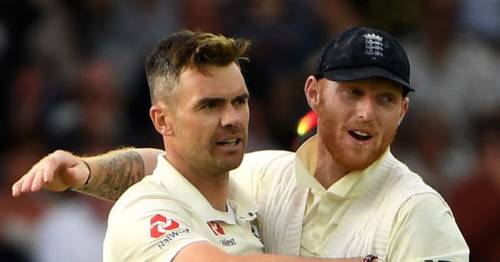 England bowler James Anderson has insisted that star all-rounder Ben Stokes "won't be rushed back" to feature in the Ashes this winter.

Stokes was not available for selection when the initial 17-man squad was announced, with the 30-year-old continuing to take an indefinite break from the sport to focus on his mental health and recover from a finger injury.

Stokes recently underwent a second surgery on his finger after injuring it in April during the IPL and recovery has been going well, with the Durham star positing an image on social media of him holding a bat properly for the first time in six months.

Unsurprisingly, many cricket fans took that as a sign that Stokes could end up becoming a late addition to the Ashes squad.

Speaking on Fox Cricket's Road to the Ashe s podcast, Anderson said Stokes will not be rushed back into action but admitted it would be "great" if he was able to play in the Ashes.

"I’m not exactly sure where he’s at," Anderson said. "That’s something he’s been talking to the guys at the ECB about – the coach and medical team there.

"I know for a fact he won’t be rushed into anything.

"For us, the squad that we’ve got, that’s who is going to be heading out there on the 4th of November and we’re going to give it our best shot to get the Ashes back.

"And if at some point we do get Ben back then obviously that’s great because he’s a huge player, but I know he certainly won’t be rushed back."

England's head coach Chris Silverwood did leave the door open for Stokes to return in time for the Ashes.

"When Ben is ready, he'll give me a call and then we'll cross that bridge when we come to it, make plans where necessary," Silverwood said on Sunday.

"Ben is moving forward, and the communications I have had with him, he is definitely more upbeat.

"I'll be led by him and my concern first and foremost is his well-being. And when he does come back we'll make sure he's in the right place and he is ready to perform."