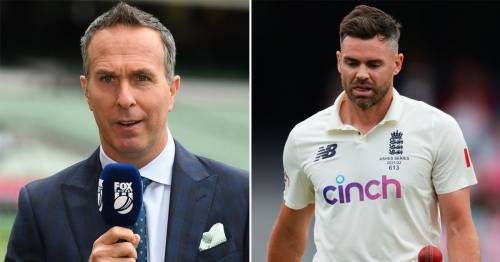 James Anderson has responded to Michael Vaughan 's suggestion that England should look to "move on" from him after their Ashes defeat.

Anderson, 39, has enjoyed an impressive tour despite England's struggles, picking up eight wickets at an average of 23.37 in three appearances.

However, Vaughan believes England should turn their back on their leading wicket-taker, insisting it would be "right for English cricket".

Vaughan also claimed that "England cannot move on and be a world force with Anderson at the helm" and called his international future "the big elephant in the room".

Anderson has now hit back at Vaughan in his Telegraph column, saying: "It is not the elephant in the room because the captain and coach know exactly what my thoughts are on it.

"They have told me their thoughts too. They want me around and to carry on. As long as that is the case, it is not an elephant in any room. We are talking openly about it.

"It always happens when you get beaten heavily in an Ashes series. The ECB will look at everyone’s performance throughout the tour.

"In that respect nobody is certain about their future whether it is the captain, coach, top six batsmen or the bowling attack. Everyone is under scrutiny.

"For me, if I have the chance to play I will do my best and keep having conversations. I will keep talking to whoever about my future.

"I feel I can still offer something to this team and hopefully I will get the chance to do so."

England's next Test series will see them take on the West Indies in March and Anderson previously said he "would love" to be on that tour.

Anderson has hit back at Vaughan's comments
(

"I have no intention of finishing," he wrote in the Telegraph earlier this month. "I just want to keep working hard and I would love to be part of the West Indies tour in March.

"I see that as my next challenge. I still get enjoyment out of bowling. I still love playing for England. I feel like I can actually help this team move forward. For me, that is why I keep going."