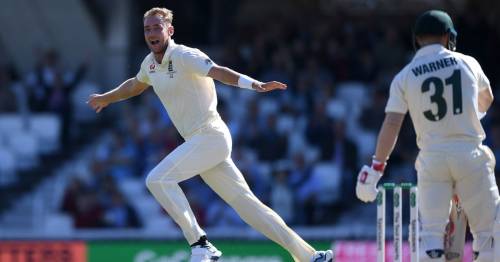 England star James Anderson is hopeful that his bowling partner Stuart Broad will be able to "stay on top" of David Warner in the upcoming Ashes series.

Broad dominated Warner in the last Ashes contest in 2019, dismissing the Australia opener a total of seven times in ten innings.

In fact, Broad has dismissed Warner 12 times in Test cricket over the years, more than any other bowler, and the pair will do battle once again this winter.

Speaking on Fox Cricket's Road to the Ashes podcast, Anderson said: "Stuart had a great amount of success against him. If he can stay on top of him, get on top of him early, it could work in our favour.

"We’ve got to start well. The Gabba in particular is huge for us. If we can start well and get one up on a few of the batters and try to find some weaknesses that can have a real snowball effect throughout the series.

"We’ve played so much cricket against David Warner, we know you can never say you’re actually on top of him, he’s that good of a batter, he’s got that much quality, especially in Australia, his record in Australia is ridiculous.

"So we know it’s going to be a different animal to the one we faced in 2019 in our summer."

Anderson, meanwhile, is looking forward to going up against Steve Smith, a player he has dismissed six times in 41 innings.

"As a bowler you always look at the best player, and for me over the last three, four or five years, Steve Smith's been Australia's best player," Anderson added.

"He's been the one they rely on for their volume of runs, obviously supported by guys around him like Warner and [Marnus] Labuschagne recently. But he's been their go-to in the last few years, so he'll be the one that we will be keen to get out early."