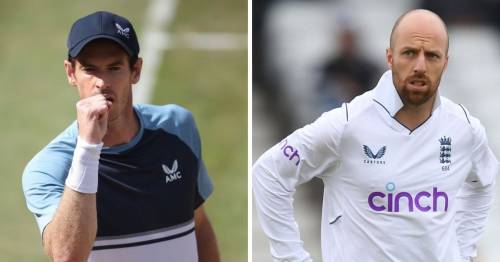 Monty Panesar believes Jack Leach can learn from tennis star Andy Murray as he bids to nail down his spot as England 's first-choice spinner.

Leach has had a difficult start to the summer, having been withdrawn from the first Test against New Zealand at Lord's after suffering concussion while fielding. The Test was Leach's first at home since the final Test of the 2019 Ashes and unfortunately ended before he got the chance to bowl.

He did retain his place in the side for the second Test at Trent Bridge but struggled to make much of an impact, picking up match figures of 3-226 at an average of 75.33. And Panesar, who played 50 Tests for England, has urged Leach to "follow Andy Murray's example" and start working with his own specialist spin coach.

On his latest column for the Telegraph , Panesar wrote: "Stokes will give Leach a few more Tests and if he is incapable of producing performances that the coach and captain want from this new look England side, I believe Matt Parkinson will play again this summer.

"Leach needs to follow Andy Murray's example, who made the smartest move of his tennis career when he persuaded his mother Judy to let him train at Sanchez-Casal Academy in Spain – a somewhat different experience than the traditional British way of trusting his growth to the coaches of the Lawn Tennis Association.

"Murray trained alongside Rafael Nadal in Barcelona instead of hurling his lot in with the best talent Britain had to offer. What Leach needs is to have his own spin coach that he trusts and can work with on a one-to-one basis.

"Due to his successful record in the subcontinent a coach from that part of the world could be a wise choice. We need to see more of a street-fighter and perceptive cricketer from him."

Former England captain Michael Vaughan recently warned Leach that he needs to improve or he will not "be in the side for much longer" and, with Moeen Ali and Adil Rashid leaving the door open for Test recalls and Parkinson waiting in the wings, the 30-year-old is under pressure heading into the final Test.

However, Panesar does believe that could be a "blessing in disguise for Leach to really sort his bowling out. He added: "I think the next 10 days before the Headingley Test will be a good opportunity for Leach to reflect on bowling and work out what he is doing successfully and, more significantly, why he can’t provide control from one end.

"The pressure from Adil Rashid, Parkinson and Moeen could be the blessing in disguise for Leach to really sort his bowling out or we may just have to pigeonhole him as a good bowler on turning pitches."