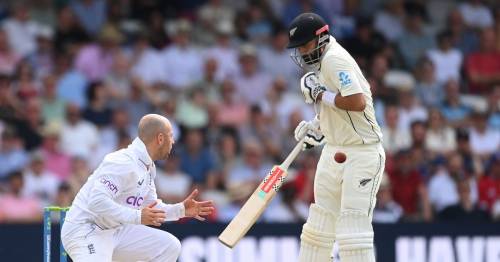 The dismissal will go down in the history books as Henry Nicholls getting caught at mid-off by Alex Lees for 19, but that does not even begin to tell the full story. In the last over before the tea break, Nicholls attempted to drive Leach down the ground.

Unfortunately, the ball went straight towards his teammate Daryl Mitchell at the non-striker's end and, while he attempted to take evasive action, hit his bat. The ball then went straight to Lees who took the catch and Nicholls was given out as the ball had not touched the ground.

Speaking on commentary for BBC Test Match Special, former England spinner Vic Marks said: "That is a remarkable dismissal. I'm not sure I have ever seen that in a Test match."

Former England captain Michael Atherton, meanwhile, called it "unbelievable", telling Sky Sports: "I've never seen anything like that. And particularly cruel for Nicholls, who was looking a bit out of sorts, battling away.

"He finally gets one out of the middle of the bat, and then Mitchell, trying desperately to get out of the way, couldn't have placed that in the hands of Alex Lees any better if he tried! An unbelievable moment."

The MCC, who are the guardians of the Laws of Cricket, also clarified why it was legal, tweeting: "An unfortunate dismissal? Yes. But wholly within the Laws.

" Law 33.2.2.3 states it will be out if a fielder catches the ball after it has touched the wicket, an umpire, another fielder, a runner or the other batter."

The wicket was Leach's second in the match, with the 31-year-old also taking a wicket with his very first delivery, getting Will Young lbw for 20. It was Leach's first ball at Headingley since his involvement in the iconic 2019 Ashes Test, where he shared a match winning, last wicket partnership with Ben Stokes.