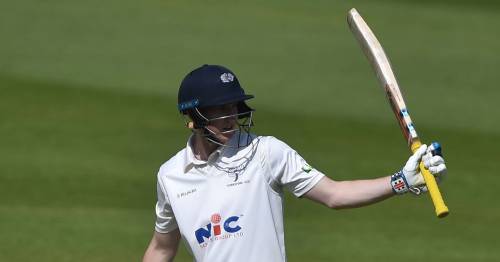 Yorkshire star Harry Brook is looking forward to testing himself against a Lancashire bowling attack led by the "best Test seamer to ever live" in James Anderson in the Roses derby match later this week.

Brook has made an excellent start to the County Championship season, with the 23-year-old currently the leading run scorer in division one. He has notched a total of 635 runs at an average of 158.75 in six innings, with his lowest score 56 not out against Gloucestershire.

As a result, he has been tipped to make his England Test debut this summer by Kevin Pietersen, while Yorkshire head coach Ottis Gibson said he feels Brook is "playing the best in the country at the moment".

With a spot up for grabs at number five after new captain Ben Stokes confirmed he would be moving down the order to number six, Brook is making a compelling case for selection.

And runs against an international calibre bowling attack that could include Anderson, Pakistan star Hasan Ali, recent England debutant Saqib Mahmood and perennial prospect Matt Parkinson would be hugely impressive.

Speaking ahead of the clash, Brook said: "It's probably come at a really good time for me to be scoring runs. There are probably going to be a few changes in that England team and if I'm picked then that’s great.

"Lancashire basically have a Test attack, so anybody who scores runs against these boys is obviously a very good player. They've got probably the best Test seamer to ever live and another couple of internationals in there as well, so it's going to be a challenge this week.

"But I feel good batting at the minute. After getting a bit more experience over the winter I think I've matured, I know my game a bit better now and I know how to try and score runs in first-class cricket.

"If I get picked [by England], I get picked; if not, I'll just keep playing for Yorkshire and trying to score runs for them. I'm not chasing anything too dramatically."