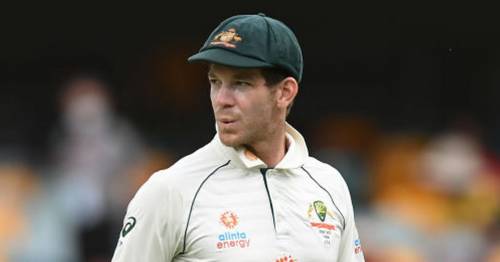 England have been told to "exploit the form of Tim Paine " and "put pressure" on the Australia captain during the upcoming Ashes series.

Australia go into the series as firm favourites, with England having a particularly poor record Down Under.

However, both Nasser Hussain and Mark Butcher believe Paine is a weak link in the Australia side and that England can have some success if they target him.

When asked what potential issues in the Australia Test team England can exploit, Butcher told the Daily Mail : "Australia may have issues racking up the kind of scores that Steve Waugh’s team used to.

"David Warner is 35 this month, his form has tailed off, and he doesn’t have a nailed-on opening partner. England can also exploit the form of Tim Paine."

Hussain, meanwhile, added: "Obviously Smith and Labuschagne are world class, but it will be interesting to see where Warner is.

"Broad will be there to remind him of 2019, when he had success from round the wicket.

"Then there’s Paine. Historically, Australia have tried to put pressure on England’s captain. I’d like to see a role reversal."

England have selected the strongest available squad for the series, with no players deciding to withdraw over concerns about the quarantine and covid restrictions.

All 17 members of the squad have played Test cricket for England this year, with head coach Chris Silverwood deciding not to pick any uncapped wildcards.

Will England win the Ashes? Let us know what you think in the comments section.

Ben Stokes and Jofra Archer are two huge misses for England, with Stokes unavailable for selection as he continues to take an indefinite break from the sport and Archer ruled out for the remainder of the year with an injury.

Fast bowler Olly Stone has also missed out on the tour through injury, while Sam Curran recently suffered a stress fracture at the IPL which ruled him out of both the T20 World Cup and the Ashes.

Previous : Joe Root eyeing first IPL gig next year with England captain ‘set to enter auction’
Next : Chris Gayle slams West Indies great Curtly Ambrose by saying he has “no respect” for him