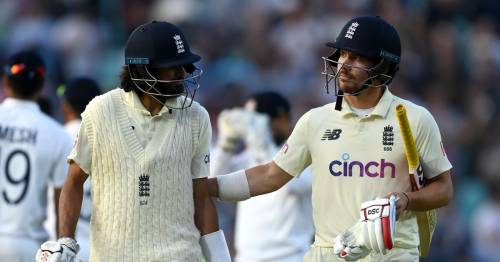 England should have axed Rory Burns and Haseeb Hameed for the Ashes, claims David Lloyd

David Lloyd believes England should have dropped their current openers Rory Burns and Haseeb Hameed for the upcoming Ashes tour.

Lloyd feels that England need more "conventional players" at the top of the order in Australia and that Daniel Bell-Drummond and Zak Crawley would be better options.

Burns and Hameed ended the recent Test series against India as the incumbents, having put on two century opening stands in three games.

Bell-Drummond, meanwhile, is uncapped and managed just 419 runs at an average of 26.18 in the County Championship this year.

Crawley also endured a disappointing year, getting dropped from the Test team after making just 156 runs at a paltry average of 11.14.

Speaking to the Daily Mail, Lloyd said: "For me, it [England's top three] should have been Daniel Bell-Drummond, Zak Crawley and Malan.

"Why would I leave out Burns and Hameed? Because you need conventional players. Burns’s technique is anything but, and Hameed has a first-class average of 32 and a strike-rate of 38 — he allows the game to meander.

Despite his poor form this year, Crawley has been named in the Ashes squad, with his technique expected to be well-suited to Australian conditions.

Speaking exclusively to Mirror Sport last month, Australian legend Shane Warne said Crawley "could be a real key" for England at the Ashes.

"I think young Zak Crawley has got a good game, he plays the short ball well," Warne said. "He plays back-foot shots pretty well and he’s made a 200 in Test cricket against a quality Pakistan bowling attack, so I think Zak Crawley could be a real key opening the batting."