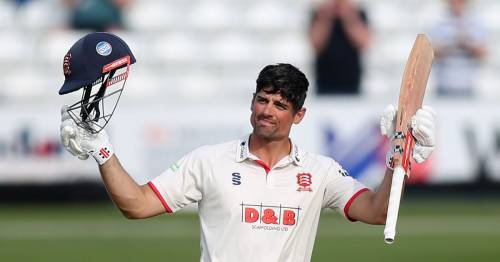 Former England captain Sir Alastair Cook scored a hundred in both innings for the first time in his career as Essex drew with Yorkshire in the County Championship.

Cook notched his 71st and 72nd first-class centuries in the match, moving him up to fourth in the list of leading run scorers in division one of the County Championship this season. And with the 37-year-old proving he remains a prolific run scorer, fans have called for him to come out of international retirement and shore up England's shaky top order.

Cook memorably called time on his England career in 2018, bowing out after making his 33rd Test hundred against India at the Oval. He remains England's all-time leading Test run scorer, with 12,472 runs at an average of 45.35 in 161 Test appearances.

Despite calling time on his England career, Cook has continued to represent Essex and signed a new one-year extension ahead of this season. And some fans want to see him return to the international stage, with many taking to social media following his latest exploits.

@StevensG020792 wrote: "Should still be opening up for England. Should be begging for him back!" @mattylufc_ added: "Still the best English opening batsman. By a distance too."

@JackRuleLD wrote: "Twin tons for chef Can we persuade the GOAT to make a return to England colours??" While @lewyitfc joked: "Young opener in excellent form… get him in the England side!"

Essex coach Anthony McGrath was full of praise for Cook after the match, saying: "Even though he has got so many runs and the game is going towards a draw, with not much on it, he's still hungry to get that hundred.

"That's testament to his whole career and the class of the man. He's been a great ambassador for the whole game, not just Essex and England.

"Hopefully we'll see a few more before he finishes and he's with us for a few more years yet."