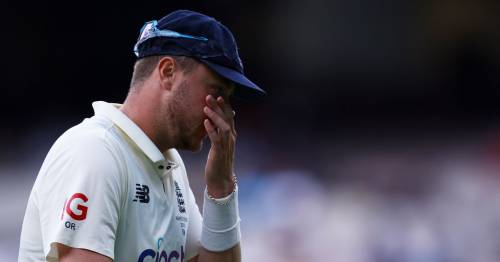 England were left cursing their luck as yet another injury cloud hung over their dressing room when they could have done without it.

Seam bowler Ollie Robinson suffered a back spasm and was unable to bowl any more than eight overs having taken the new ball so effectively.

Robinson left the field just after the first break complaining of stiffness which prevented him from following up properly his opening spell of seven overs that earned him 2-15 and a place in the history books.

For the first time in 244 international innings together, both David Warner and Steve Smith had failed to trouble the scorers thanks to Robinson’s skill with the ball.

He found both their edges and the slip cordon did the rest, and in fact he should have had a third duck in his pocket but Marnus Labuschagne was dropped by Zak Crawley.

That life together with a blistering second hundred of the series for Travis Head helped Australia turn around their troubles from 12-3 to finish 241-6 by the close of day one before the rain intervened.

England had already made five changes to their team, mainly due to injuries with James Anderson one of them.

And with Ben Stokes unable to play a full part as a bowling all rounder, the workload on the remaining three main bowlers went up.

Robinson removed both David Warner and Steve Smith for ducks
(

Complaining of a twinge in his back Robinson left the field for treatment, and when he returned, was clearly in difficulty.

There have been questions about Robinson’s fitness on this tour and his inability to keep his pace up throughout matches, but this was a huge way to let down his teammates.

This was the same Robinson who had played 36 holes of golf at an exclusive resort in the north of the island on Tuesday before declaring himself fit and ready to go for the Test.

Lower back stiffness and suffering a back spasm just eight overs into a Test match, suggests that he still has little idea of how best to prepare his body for the rigours and challenges of Test match cricket.

Travis Head scored his second hundred of the series
(

England made a reasonable decision at the toss to bowl first considering the cloudy skies above and the verdant pitch below.

And for the first hour of the game everything was going to plan as Stuart Broad and Robinson ripped through the Aussie top order.

Warner had been at sixes and sevens against Broad, as you might expect, but it was Robinson who found the edge with one that nipped away to take the edge.

Broad had to make do with twin Sydney centurion Usman Khawaja for just six, well held by Root, before Robinson struck again to remove Smith.

At 12-3 the Aussies were in all kinds of bother, but Head and Labuschagne changed the narrative in another hour of pulsating cricket.

They decided to have a go and boy did it pay off. Head, returning to the side after missing out in Sydney with covid, took the attack to England and it was vicious.

Mark Wood and Chris Woakes bore the brunt of the counterattack as Labuschagne hit six fours and Head connected with three in their partnership of 71 in just 12 overs.

Labuschagne literally fell for 44 just before the first break after getting his feet in a tangle and getting bowled round his legs as he tumbled to the deck.

With Head taking a liking to the pace of Wood and the classic action of Woakes, England were soon trying to defend another avalanche of runs as all rounder Cam Green got in on the fun too.

The pair added 121 in 25 overs at almost five runs per over in a thrilling and entertaining passage of play that gave the Hobart fans exactly what they came to see.

Not for the first time on this tour England had no answer, and the sight of part time spinner Root sending down 10 overs on day one of a Test on a seamer’s paradise with the floodlights taking effect was not ideal.

Head reached his hundred to universal acclaim before chipping the very next ball into the hands of Robinson at mid-on.

Green looked set to get to three figures, too, but he top edged Wood’s extra pace into the hands of Crawley out at deep square leg.