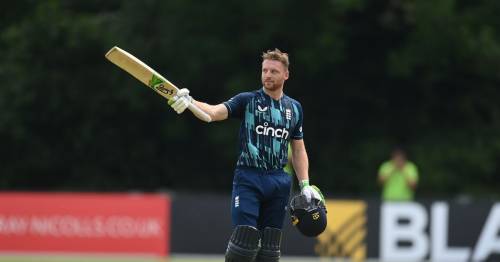 Matthew Mott 's tenure as England white ball coach got off to the perfect start as his side set a new world record for the highest ODI total in history as they defeated the Netherlands by 232 runs in a dominant display in Amstelveen.

Jos Buttler was the star of the show, blasting a scintillating 162 off just 70 balls as England broke their own record. They made 498-4 in their innings, eclipsing the previous record of 481-6 which they made against Australia in 2018.

Liam Livingstone helped Buttler finish off the innings in style, walking out with the score 407-4 and striking England's quickest ODI half-century off 17 balls.

In total, Livingstone finished 66 not out off 22, ending the innings in style as he launched England's 26th maximum off the final delivery.

Earlier, both Phil Salt and Dawid Malan scored their first ODI hundreds, with Salt's century his first in an England shirt and Malan's seeing him join an elite club.

Malan is now just the third England player to have scored a hundred in all three formats after England women's captain Heather Knight and Buttler.

It was a stunning display of hitting from England, but they did benefit from a few dropped catches, with Buttler notably put down twice in the 30s and both Salt and Livingstone given lifelines before they had reached their half-centuries.

It was a chastening experience for a young Dutch side which fielded two teenagers and was missing at least five key players due to county cricket commitments. In response to England's world record score, the Netherlands mustered a respectable 266 total, with opener Max O'Dowd scoring an impressive 55 and wicketkeeper Scott Edwards making an unbeaten 72.

Moeen Ali was the pick of the bowlers for England, taking 3-57 from his 10 over spell. There was also an impressive return to international duty for Sam Curran, who got through nine overs and picked up 2-46 after recovering from a lower-back stress fracture.

All in all, it was a comprehensive display from England, who will have one eye on next year's impending World Cup defence. And while it was star man Buttler who stole the show, Mott will be delighted to have seen both Salt and Livingstone make such an impact in just their fourth ODI appearances.

Previous : Mum-of-12 aged 33 who’s been pregnant for 17 years says she has had enough kids
Next : 6 talking points as Roy is left red-faced by cousin before Buttler steals show for England