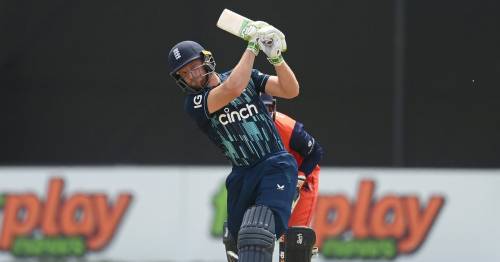 England have broken their own record for the highest ODI score after blasting 498-4 in the first ODI against the Netherlands at Amstelveen.

Jos Buttler was the star of the show for England as he struck the second-fastest 150 in ODI history off 65 balls, falling just one delivery short of equalling AB de Villiers' record. Buttler was the third Englishman to score a century in the innings, following Phil Salt and Dawid Malan.

Salt's 122 off 93 balls was his first hundred in an England shirt, while Malan's 125 off 109 balls meant he became just the third England batter to reach three figures in all formats after Buttler and England women's captain Heather Knight.

Although both Salt and Malan batted brilliantly for their hundreds, Buttler was on a different level as he blasted his way to an unbeaten 162 off just 70 balls.

He was joined at the death by Liam Livingstone, who showcased his power by striking England's fastest ever ODI half-century off 17 balls.

It was a scintillating team effort from England, who have now scored the three highest ODI totals in history.

England scored the highest ever ODI total, breaking their own record
(

Their 498-4 is also the highest men's List A score ever, breaking Surrey's record of 496-4 which they made against Gloucestershire in the 2007 Friends Provident Trophy.

England ultimately fell short of becoming the first side to score 500 in an ODI innings, but it was a monumental effort and a perfect start to new white ball coach Matthew Mott 's tenure.

Speaking on commentary for Sky Sports, former England batter Mark Butcher said: "Just stand back and marvel at the ball-striking power and skill of Jos Buttler and Liam Livingstone."

Previous : Dawid Malan joins elite club by matching England record with century vs Netherlands
Next : When do schools break up for summer 2022? Holiday start dates across UK