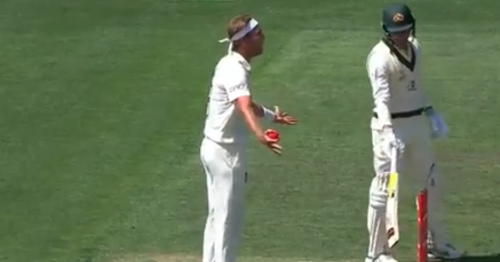 England star Stuart Broad was forced to halt his run-up after getting distracted by Fox Sport's robot camera during the fifth Ashes Test in Hobart.

The host broadcaster uses a roving camera on the boundary as part of their coverage and Broad was angered after it continued to move while he was running in to bowl.

In a direct message to the broadcaster, Broad was heard saying "Stop moving the robot!" on the stump mic.

"Get to the naughty corner Foxy," joked Vaughan's fellow commentator Shane Warne. "Go and stand in the corner for a while."

Fans were quick to react to the incident on social media, with one joking: "Stuart Broad yelling at a robot for moving has some serious Terminator 5 vibes".

"Broad vs Fox Robot Camera in Mortal Kombat is a match I would watch", joked another.

"Stuart Broad having a Virat Kohli moment with that rant to the Fox TV director: 'STOP MOVING THE ROBOT!'" wrote a third.

Broad ended up taking 3-59 in Australia 's first innings, getting the wickets of Usman Khawaja, Marnus Labuschagne and Nathan Lyon.

The 35-year-old was the pick of the bowlers for England, having started brilliantly in partnership with Ollie Robinson with the new ball and remaining the most economical throughout the innings.

After slipping to 12-3 on day one, Australia recovered to make 303 when they were finally bowled out by England on day two.

Travis Head celebrates after scoring his second hundred of the Ashes
(

Travis Head was the star of the show for the hosts, making an outstanding century on his return to the side after testing positive for Covid.

He was ably supported by an important 74 from Cameron Green and a useful 44 from Labuschagne, before Lyon's cameo of 31 got Australia past the 300 mark.

In response, England got off to a nightmare start when the recalled Rory Burns was run out for a duck and opening partner Zak Crawley was caught at short leg for 18.

Previous : Ricky Ponting slams Rory Burns after England opener run out for a duck in the Ashes
Next : Canadian foreign minister to visit Ukraine, vows to deter Russian aggression