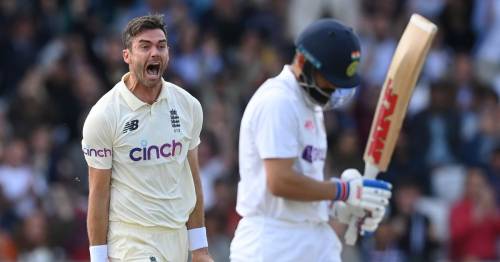 England 's star bowler James Anderson has revealed that his fiery contests with India captain Virat Kohli this summer were his "favourite".

The pair have a storied history, with Anderson getting the better of Kohli on his first tour of England in 2014, dismissing him four times and conceding just 19 runs.

When India returned to England in 2018, Kohli ultimately prevailed, scoring two centuries at an average of 59.30 and not getting out to Anderson once.

The contest was much more balanced this year, with Anderson getting Kohli out twice in seven innings at a cost of 64 runs.

The pair also clashed verbally, with an x-rated outburst from Kohli directed at Anderson getting picked up by the stump mic during the second Test.

With Anderson bowling to Cheteshwar Pujara and Kohli at the non-strikers end, he was heard using the word "f***ing" and telling Anderson "this isn't your backyard".

Reflecting on his battles with Kohli during an appearance on Fox Cricket's Road to the Ashes podcast, Anderson said: "This summer was probably my favourite contest with Virat.

"We've had a few good battles over the years, both in England and India, but this year was certainly my favourite.

"I got him out a few times but also he got some runs as well, and we had a battle on the field where there was definitely a mutual respect there.

"It was in a really nice manner, if that makes sense. Obviously we were going at each other, but it was in a well-spirited way. So I really enjoyed that."

Anderson is currently gearing up for this winter's Ashes tour and, even at the age of 39, he is keen to play in all five Tests but notes the prospect is unlikely.

"I will do exactly what I did in our summer," he said. "Hopefully I'll be playing all five, but I'd be happy with three or four.

Anderson is currently preparing for England's upcoming Ashes tour down under
(

"You manage it as you go through the series. If any of the bowlers' workload spikes – if we do a 50-55 overs in a Test match – you've got to look at the next one, and if it's sensible to play because they come so thick and fast.

"We've got decent squad of bowlers, so we can rotate a little bit, as we have been for the last 18 months to two years. The likelihood of playing all five at my age, to be honest at any age in Australia, [is slim].

"It does take a lot out of you, especially in the heat in some of the venues. So we just have to wait and see."

Previous : Q&A: La Nina’s back and it’s not good for parts of dry West
Next : Jofra Archer names six overseas stars to watch at T20 World Cup, including Rashid Khan