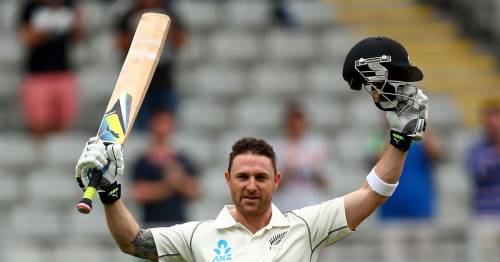 The 40-year-old has replaced Chris Silverwood, who was sacked back in February following England's 4-0 defeat to Australia in the Ashes. As first revealed by Mirror Sport on Tuesday, McCullum emerged as the new favourite for the role following the interview process and he has now signed on with a four year contract.

He had initially been thought of as a candidate to coach the white ball team, having only ever coached on the franchise T20 circuit. However, during his time as New Zealand skipper, he helped revolutionise their approach to Test cricket and laid the foundations for their World Test Championship triumph under successor Kane Williamson last year.

McCullum played a total of 101 Test matches for New Zealand and his appointment has been confirmed in a statement from the ECB, who labelled him the "outstanding candidate for the role". He said: "I'd like to say how pleased I am to be given this opportunity to positively contribute to England's Test cricket set-up and move the team forward into a more successful era.

"In taking this role on, I am acutely aware of the significant challenges the team faces at present, and I strongly believe in my ability to help the team emerge as a stronger force once we've confronted them head-on. I've enjoyed several robust conversations with Rob Key about the direction of travel for the team and have found his enthusiasm contagious.

"I'm no stranger to bringing about change within a team environment, and I can't wait to get started. Ben Stokes is the perfect character to inspire change around him, and I look forward to working closely with him to build a successful unit around us."

McCullum is currently coaching Kolkata Knight Riders in the IPL but is standing down at the end of the tournament and, with his side highly unlikely to make it to the playoffs this time, he will be in position alongside captain Stokes well before the first Test against New Zealand on June 2.

He has extensive knowledge of the English game having played for four different counties during his playing career and would be able to have an influential say on selection for that first Test. He could form a dream team partnership with Stokes, as two men who have similar positive outlooks on the game and how to take it forward.

Managing Director of England Men's Cricket Rob Key added: "We are delighted to confirm Brendon as England Men's Test Head Coach. It has been a real privilege to get to know him and understand his views and vision for the game.

"I believe his appointment will be good for England's Test team. He has a recent history of changing cricket culture and environments for the better, and I believe he is the person to do that for England's red-ball cricket.

"We were incredibly fortunate to have a seriously strong list of quality candidates for the post, with Brendon demonstrating he was our number one choice. I'd like to thank Tom Harrison and the ECB Board for their support in this process.

Previous : Desert Crown is the new Derby favourite after brushing aside trainer’s concerns in Dante
Next : Brendon McCullum statement in full as new England coach begins tenure with bullish claim