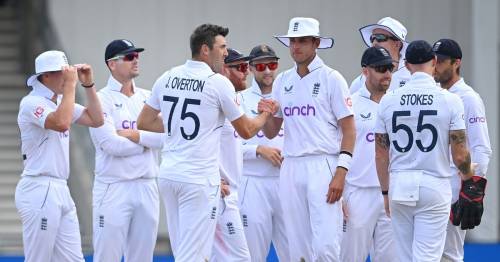 England were forced to park the glitz and the glamour and instead show they could get down and dirty with some old fashioned Test cricket too.

An attritional day of action with his bowlers taking just five wickets was not exactly the ‘sexy’ cricket Brendon McCullum was referring to as part of his blueprint for the England team. “For us, it’s a matter of trying to ensure that Test cricket’s still sexy and people want to watch it,” he told his previous employers on Kiwi radio.

“If England is strong, then Test cricket has got a real chance of thriving and being successful. That’s what’s in front of us and to do that, you’ve got to play an attractive brand of Test cricket.”

But thanks to the continued defiance of Daryl Mitchell and Tom Blundell in an incredible series for them both, England had no choice but to grind away for their rewards and spend a day in the dirt as New Zealand reached 225-5.

Their bowlers certainly didn’t lack effort and application, but having reduced the toss-winning Kiwis to 83-4 and 123-5, their hopes of slicing through the rest of the lineup was always going to come unstuck against this familiar pair.

Mitchell and Blundell have so far put on 591 runs in five partnerships in this series and their latest one here is worth 103 and has again pulled New Zealand out of a hole. England shouldn’t be too disheartened about that though because they have obviously come out on top twice already despite the lengthy periods this duo have batted together.

Not since Graeme Smith and Herschelle Gibbs operated at the top of the order for South Africa in 2003 has a visiting pair scored more runs together nor indeed faced more than 1000 balls. It might even have been different this time had England taken a chance on an lbw appeal when Mitchell had made just eight.

Matt Potts tailed the ball into the right hander who fell over towards the off side as the ball cannoned into his pads but both the players and the umpire thought it was going down the legside.

Had they taken the positive gamble and asked for a review, he would have been given out and the day could have had a completely different complexion. And it would have been a well deserved wicket for Potts too who charged in with skill and heart all day to concede just 28 runs from his 20 overs.

There was at least a maiden Test wicket for Jamie Overton who had been presented with his cap by twin brother Craig who briefly appeared as a substitute fielder allowing their parents to see both sons on the field for England at the same time.

And what kind of first Test wickets do twins take? Identical of course.

Not since Tony Lock in 1961 has an England spinner sent down more than 25 overs on day one of a Test at Headingley, but on a dry surface Jack Leach delivered 30 of them and did a decent job too.

He finished the day with 2-75 having captured a wicket with his very first delivery and one of the most bizarre wickets from his 92nd.

Henry Nicholls came down the pitch and drove firmly towards mid-on but it was a bit uppish and as non-striker Mitchell tried to get out of the way his bat deflected the ball straight into the hands of Alex Lees at mid-off.