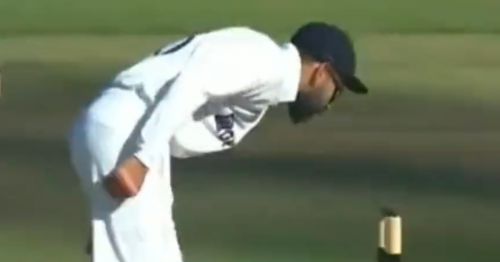 Virat Kohli and his India side have been widely slammed for their behaviour during the third Test against South Africa after a controversial DRS decision.

South Africa captain Dean Elgar had been given out LBW off the bowling of Ravi Ashwin but the decision was overturned upon review, with HawkEye suggesting the ball would have gone over the stumps.

The decision did not sit well with India, with captain Kohli, Ashwin and vice-captain KL Rahul all voicing their displeasure and taking aim at host broadcaster SuperSport.

"Focus on your team while they shine the ball," Kohli said directly into the stump mic. "Not just the opposition. Trying to catch people all the time."

Rahul then said, "It's the whole country against 11 guys," before Ashwin added, "You should find better ways to win, SuperSport."

Reacting to the incident, former England captain Michael Vaughan labelled India's conduct "disgraceful" and called for the ICC to "stamp down" on Kohli and co.

"I think that is disgraceful from the Indians personally," Vaughan told Fox Sports. "Decisions go with you, they go against you, that didn’t go the way they think it should have gone.

Former South Africa international Daryll Cullinan was also critical of India's conduct, claiming Kohli has got away with "unacceptable" behaviour "for too long".

Speaking to ESPNcricinfo, Cullinan said: "This is the typical Virat’s untouchable, he behaves the way he wants to behave.

"The rest of the cricket world just bows down to Virat. The powerhouse is India. I hate to say this but it’s been going on for years.

"It’s just the big suck-up towards India and anybody who plays for India. They are untouchable, so everyone will laugh it off.

"I love Virat Kohli, I love his cricket, I love the way he plays. But there has to be a line drawn somewhere to say ‘hang on, you must be severely punished’.

"If anything, it was a mistake. I just cannot believe that they could think along those sort of lines.

"For too long Virat has got away with behaviour which is unacceptable on a cricket field. But he’s Kohli and I don’t like it, quite frankly."

Previous : ‘Adored’ grandparents both killed in three-vehicle car crash near their home
Next : 5 Ashes talking points as Travis Head makes triumphant return to the side in Hobart