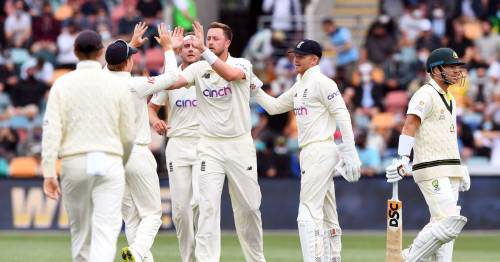 After getting recalled to the side for the fifth Ashes Test in Hobart, Ollie Robinson picked up two key early wickets, getting both David Warner and Steve Smith out for ducks.

Robinson was one of five changes England made to their side, with Rory Burns, Ollie Pope, Sam Billings and Chris Woakes also brought into the XI.

After Joe Root won the toss and decided to field, Robinson took the new ball alongside Stuart Broad and made the early breakthrough.

Ollie Robinson celebrates after getting David Warner out for a duck
(

Warner lasted 22 balls at the crease before getting caught at second slip by Zak Crawley for his fifth duck in Ashes cricket.

Speaking on BBC Test Match Special, former England bowler Steven Finn said: "Lovely piece of bowling. In the previous over Robinson was slightly short and he has adjusted his length.

"He has got significant seam movement. Warner just pushed forward but because of the nip in the surface it found the edge."

Former Australia bowler Glenn McGrath added: "England have bowled quite well. Broad has bowled a really good length. Robinson was a little short but has adjusted. These conditions are perfect for him."

Khawaja, who scored twin tons in the fourth Test in Sydney, lasted 26 balls and was caught by Root at slip for six.

Steve Smith lasted just two balls, getting caught behind off Robinson for a duck
(

"You wonder if Khawaja really had to play but it is the length and the angle coming in," McGrath said. "It is another big wicket. England are making the most of winning this toss."

Smith then became the third Australian wicket to fall, also getting caught in the slips to leave his side 12-3.

It was Robinson who made the breakthrough once again for England, with the Sussex seamer continuing to impress in his first Ashes series.