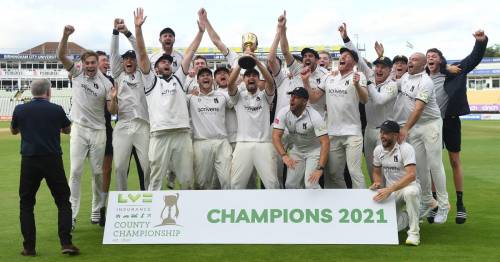 The County Championship will return to a two division structure next season after a vote by all 18 counties.

As a result of the coronavirus pandemic, the competition has been played using a different structure for the past two seasons.

In 2020, the inaugural edition of the Bob Willis Trophy replaced the County Championship, with a three-group conference system used for this year's campaign.

However, the county's have voted for a return to two divisions, with 10 teams playing in Division One and eight teams in Division Two.

There will also be a two-up, two-down promotion and relegation system, with the counties getting placed in their respective divisions based on which one they would have been in for the 2020 season.

As a result, Nottinghamshire find themselves in Division Two after getting relegated in 2019, despite finishing third in Division One in this year's edition of the County Championship.

A statement from the ECB read: "The England and Wales Cricket Board's role ahead of this week's vote has been to facilitate discussions between the first-class counties and provide the options available to them.

"The priority of those discussions has been to determine when and how a return to the two-division structure could best be achieved.

"The process to transition to that structure had begun during the 2019 LV= Insurance County Championship. At the end of that season three counties were promoted from Division Two (Lancashire, Northamptonshire, Gloucestershire) while the last-placed Division One county (Nottinghamshire) was relegated.

"A two-division Championship has, however, not taken place since then due to Covid-19. But it has always been the intention of the first-class counties and the ECB to return to the two-division structure at the earliest opportunity.

Warwickshire won this year's edition of the County Championship, which used a three-group conference system
(

"After the vote to change the format of men's first-class cricket in 2020 and 2021 to mitigate against the impact of Covid-19, this week's vote also considered the option to play one further year of the seeded group structure that was successfully staged this summer.

"Although there was support from counties to use the 2022 season as a way to step back to a two-divisional structure, there was not the two-thirds majority that was required."

Previous : Cricket Australia in chaos ahead of Ashes as chairman resigns after states mount revolt
Next : Teen sentenced to maximum of 9 years to life for killing of Barnard student Tessa Majors