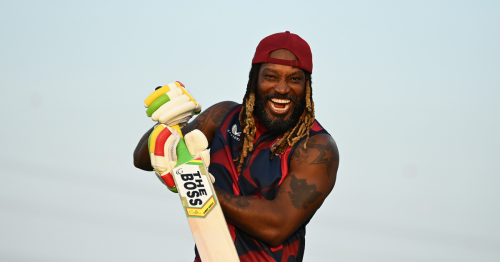 Cricket West Indies has unveiled a new tournament called 'The 6ixty', which is set to take place in August ahead of the new Caribbean Premier League season.

The tournament is a version of T10 cricket, but includes several new rules and regulations, including the introduction of a 'mystery free hit'. Given the name, the tournament has drawn inevitable comparisons to The Hundred and was announced in a video fronted by West Indies legend Chris Gayle.

Gayle described the 6ixty as "my type of cricket", calling it "a brand new format that brings cricket fans closer to the action". Each side will have six wickets and can unlock a third powerplay over if they hit two sixes in the first two overs.

The first 30 balls will all be delivered from one end, with the final 30 all delivered from the other end. If teams do not bowl their overs quickly enough, they will lose a fielder for the final over.

And the mystery free hit allows supporters to decide when a ball will be bowled that the batter cannot be dismissed from. CWI president Ricky Skerrit added: "I am really excited about the innovation, excitement and entertainment."

However, fans on social media have been left split by the 6ixty, with some questioning the need for a new format, but others expressing excitement at the new innovations. Former Lancashire and South Australia cricketer Joe Scuderi was scathing in his assessment, writing: "Absolute load of unadulterated crap. Enough already with these bastardised versions of cricket".

Twitter user @Stephan_KG fumed: "STOP CHANGING CRICKET!!! This is seriously the dumbest thing I've ever heard. It sounds like a completely different sport. I'm all for a new sport or code, but let's not pretend this is cricket".

However, former Pakistan batter Faisal Iqbal said: "Sounds exciting", while @Footy_Patil described it as "Kinda weird and kinda interesting at the same time".

"INTERESTING…risk and reward!" added @imkb11. "I think this sounds like great fun," wrote @lindystephens "I'm sure it will have a family atmosphere too, rather than yobs sitting around getting drunk all day."

Previous : Brendon McCullum’s main aim is to make Test cricket ‘sexy’ after blistering England start
Next : Henry Nicholls out in bizarre fashion as Jack Leach takes one of luckiest wickets ever